INSTEAD of getting some much-needed rest during the PBA All-Star break, the NLEX Road Warriors hit the road to take part in the grandest and most popular tourist activity in the north - the Panagbenga 2015 in Baguio City.

"We are already in the PBA. We are new team so we wanted to bring our players closer to the fans. NLEX has always been part of Panagbenga but this is the first time we're bringing in professionsl and popular cagers to the parade," said NLEX team manager Ronald Dulatre.

The NLEX float was among the most applauded during the Panagbenga parade, with KG Canaleta, Enrico Villanueva, Aldrech Ramos, Jonas Villanueva, rookie Harold Arboleda and Taulava gamely interacting with the crowd.

"It has always been my dream to take part in the Panagbenga as it is one of the most popular events in the country. So when NLEX told me to join the parade, I cancelled all of my other engagements," said Taulava, who will turn 42 on Monday.

Fifty young kids from Baguio and nearby Benguet province were given high-level scientific training as part of NLEX's corporate social resonsibilities in provinces that pass through their world class 88-kilometer tollway.

"Like we told you before, we will roam around cities and municipalities in north and central Luzon to preach basketball and also sponsor other sporting activities like cycling, volleyball, taekwondo among others," said Gregorio, who was assisted in the clinic by NLEX assistant coaches Sandy Arespacochaga, Ford Arao, Ajay Serrano, Gyno Manuel and Mon Celis.

The next stop of the NLEX basketball clinic is Vigan, Ilocos Sur, shortly after the PBA All-Star break. 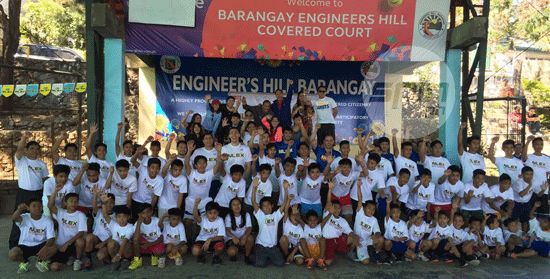