THE words grand slam in the Philippine basketball setting is synonymous to dominance, reserved for a PBA team that won all three conference titles in one season. However, with calls for the PBA to switch to a two-conference format, a grand slam victory may not have the same aura than the previous years.

When the PBA adopted the two-conference format from 2004 to 2010, there was no team which swept the season titles. There were, however, teams that came close by making the finals of the two conferences.

The Phone Pals settled for runner-up finishes in the 2004-05 season, bowing to Ginebra in the Philippine Cup and San Miguel in the Fiesta Cup. The Phone Pals had a stacked lineup in 2002 and 2003 MVPs Willie Miller and Asi Taulava plus Jimmy Alapag, Yancy De Ocampo, and veteran Vic Pablo.

The Phone Pals returned to the finals in the Fiesta Conference as the top seed. But even with Jerald Honeycutt as import and Taulava back in the lineup in the championship series, Talk ‘N Text lost to San Miguel after a 91-87 defeat in Game Five.

The Aces wrested the 2010 Fiesta Cup after a 4-2 series win over San Miguel, putting them on track for a season sweep in the Philippine Cup. Alaska emerged as the top seed in the all-Filipino conference on a 13-5 mark. The 2006 MVP, Willie Miller, led the team to the championship series against Purefoods with help from Sonny Thoss, Joe Devance, Tony Dela Cruz, and LA Tenorio.

However, Alaska succumbed to Purefoods in one of the rare sweeps suffered by Tim Cone in a playoff series. With James Yap leading the charge, the Chunkee Giants completed the 4-0 rout after an 86-76 victory.

The Chunkee Giants actually won two championships during the two-conference era, with the first at the expense of Red Bull in the 2006 Philippine Cup Finals (More of this later). Purefoods, however, wasn’t able to get the job done in the 2005-06 Fiesta Cup when it bowed to the same Red Bull team in the first conference despite holding the top-seed in the elimination round. 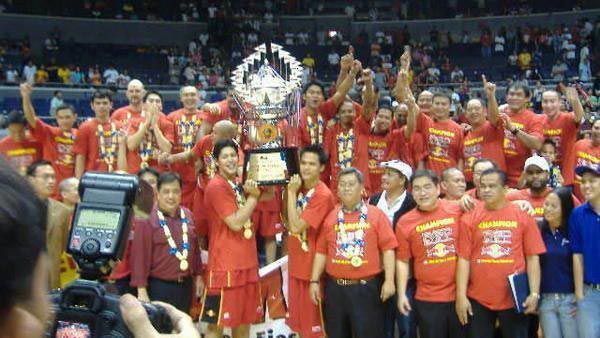 It was Red Bull which came the closest to achieving the grand slam in the two-conference era by reaching the finals in both the 2005-06 Fiesta Cup and the Philippine Cup.

Under Yeng Guiao’s stewardship, the Barako advanced to the finals after a sweep of Alaska in the quarterfinals and dispatching Ginebra in the a seven-game semifinal series that went the distance. Tied at 2-2 in the finals against top seed Purefoods, Red Bull took Game Five, 91-86, before finishing off the Chunky Giants, 83-73, in the next match with James Penny tallying 21 points and Cyrus Baguio and Mick Pennisi each scoring 13.

Come the Philippine Cup, Red Bull once again took the third seed and beating Ginebra and San Miguel in the playoffs to set up a rematch .

A rematch ensued with Red Bull taking Purefoods for the Philippine Cup title. In contrast to the previous conference, Purefoods raced to a 2-0 lead in the finals and made it 3-1 after a 99-81 Game Four victory, the same night James Yap captured the MVP. Red Bull and Guiao’s bid for that first two-conference grand slam came to an end in Game Six with Purefoods taking the 90-83 victory. Marc Pingris was named the Finals MVP.