THE defending champions got what they were asking for.

Coach Nash Racela believed San Miguel managed to send its message across to game officials judging from the way referees made the calls in Game Four of the semifinal series between the Beermen and the TnT Katropa on Valentine’s Day.

The TnT coach said it was obvious the complexion of the officiating tilted in San Miguel’s favor in the 97-86 loss by the Texters at the Mall of Asia Arena that left the PBA Philippine Cup best-of-seven series tied at two-games apiece.

The San Miguel win came a day after veterans Chris Ross and Marcio Lassiter called out the referees for not ‘giving the Beermen the respect that they deserved’ as the two-time reigning all-Filipino titlist after losing Game Three on Sunday, 98-92..

Racela said whether champion or not, officiating should never favor anybody or any team for that matter.

“They got what they want,” he stressed. “They’re demanding some treatment from the referees after the last game. If you heard what Ross and Lassiter said, they got it today. It’s that kind of entitlement because they are the champions.”

TnT was called for more team fouls than San Miguel, 30-24, while the Beermen were awarded 24 free throws as compared to the 12 of the Texters.

But the soft-spoken mentor refused to dwell on the numbers, but remained consistent in his belief that there should be no special treatment on any team.

“Sa aking standard, that is wrong.” 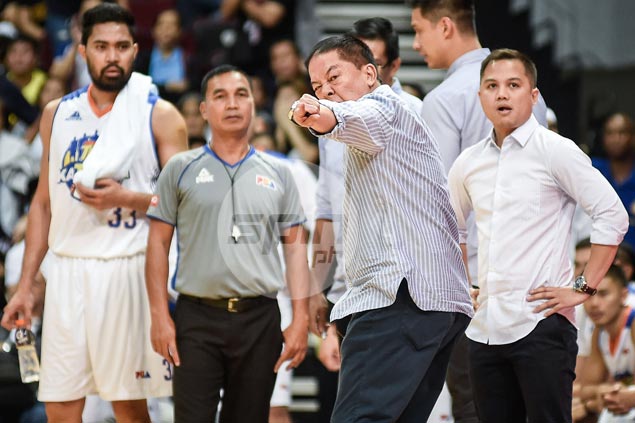 He was quick to insist that he’s not bothered by the officiating, which he said is just one factor to be considered in the series.

But Racela was left wondering why no lady referee officiated in Wednesday night’s game, pointing out at how Edith Boticario did a fine job in Game Three of the series.

“I really thought the lady referee, she was the one who made the right calls the last game, and all of a sudden, walang lady ref (today),” he said.

Before he can be labeled as a feminist, Racela said it’s not about having a lady referee or not.

“Ako as a coach, we don’t ask for special treatment. We just asked the refs to make the right decision that won’t favor anybody or any team,” Racela added.