THE last time a coach and a star player feuded publicly at GlobalPort, one was gone after a few months.

Will it be no different this time?

That should be the question on a lot of fans' minds after GlobalPort star Terrence Romeo and head coach Pido Jarencio figured in an ugly shouting match in the second half of an 86-79 loss to Magnolia that ousted the Batang Pier from the Philippine Cup playoffs.

Both Jarencio and Romeo were quick to play down the incident after the match, echoing a (management-fed?) line about 'two competitors bumping heads in the heat of the moment' after the game.

Romeo said it was a 'misunderstanding.'

Jarencio said something about to that effect, too: 'Nagkasarapan lang.'

So is that the end of it?

In the case of Romeo and Jarencio, we all know that Romeo has been the subject of trade rumors during most of his time away from the action, supposed because of a knee injury.

Last November, we first reported about Romeo wanting out and GlobalPort trying to make a deal with Meralco, who, sources said, agreed to trade Baser Amer but balked when the Batang Pier sought to include coach Norman Black's 'fair-haired boy' Chris Newsome in the package.

Another deal, for TNT big man Mo Tautuaa, was rejected by the KaTropa, another source bared.

Well, don't look now but a GlobalPort source bared that TNT has expressed interest in making a deal for the flamboyant Gilas Pilipinas star, weeks before the infamous spat with Jarencio.

Let's see what happens from here, but we feel that the shouting match has given GlobalPort management one more good reason to part with its superstar.

As for Jarencio, it's worth noting he has proven that he can win without the enigmatic Romeo. GlobalPort under Jarencio went 5-6 (win-loss) without Romeo and 0-2 since his return. 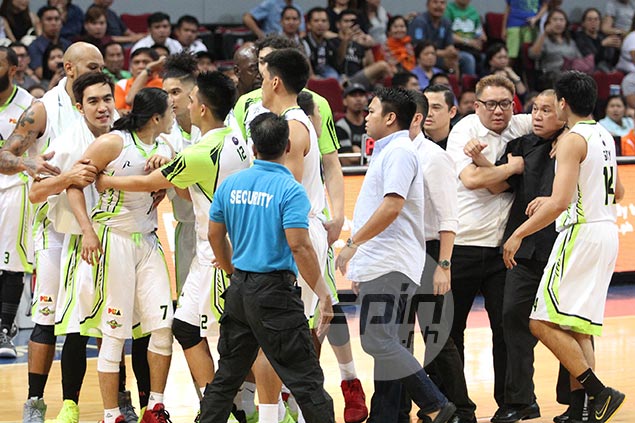