DIGOS – The Mindanao All-Stars dealt Gilas Pilipinas quite a beating, 144-130, in the first leg of the PBA All-Star week at the jampacked Davao del Sur Coliseum on Wednesday night.

The smaller Mindanao natives turned to their speed against the taller Nationals, banking on a backbreaking 20-4 run to start the fourth quarter to break away to the delight of the virtual home crowd.

Baser Amer led the balanced attack that saw eight players score in twin digits for the Mindanao selection to be named the All-Star game MVP.

The result spoiled the sterling showing of June Mar Fajardo, who registered 34 points and 14 boards for the Smart All-Stars National Team in a losing effort.

Action shifts to Batangas on Friday night when the Luzon All-Stars take their turn against the national team in the second leg of the midseason spectacle sponsored by Phoenix Fuel with Phoenix Pulse Technology.

Facing a Gilas side that’s preparing for the third round of World Cup qualifiers on June 29 against Taipei and July 2 against Australia, the Mindanao All-Stars proved to be a tough challenge as they engaged them in a nip-and-tuck battle before pulling away early in the payoff period.

Clinging to a 104-99 lead at the end of the third period, Mindanao turned the pace up a notch to suddenly extend their cushion to 124-103 following a Jio Jalalon reverse layup as they never looked back.

Amer scored 13 points in that final frame as the Meralco star playmaker and pride of Maa, Davao City finished with a game-high 22 markers on 9-of-11 shooting, including four triples, seven boards, seven assists, and one steal in almost 29 minutes off the bench. 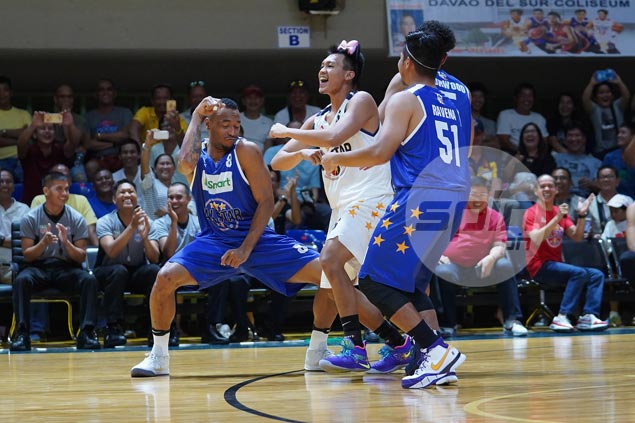 Mark Barroca led the starting unit with 20 points, highlighted by four treys, seven assists, six rebounds, and three steals in almost 32 minutes, while PJ Simon sparked the attack by scoring all but two of his 17 points in the first half.

The win put an end to coach Tim Cone’s five-game losing streak in an All-Star game, posting his first win since 1999 with the PBA veterans, led by All-Star game MVP Benjie Paras, according to chief statistician Fidel Mangonon III.