The NLEX bruiser shrugged off the bloody cut above his left eye which was caused by an Eram elbow, but expressed disappointment that his Blackwater counterpart had to resort to such tactics.

"Sa basketball hindi naman maiiwasan yang ganyan na mga pisikalan," said Miranda when SPIN.ph caught up with him during the official presentation of Team NLEX and its new logo on Monday night in Balintawak.

The altercation between the two happened during last week's tune-up game pitting the Elite against the Road Warriors. The two were ejected in the third quarter of the match which NLEX won, 90-88.

Miranda, a former San Sebastian stalwart, was left nursing a three-inch cut above his left eyebrow, which was covered with bandage during the NLEX event. 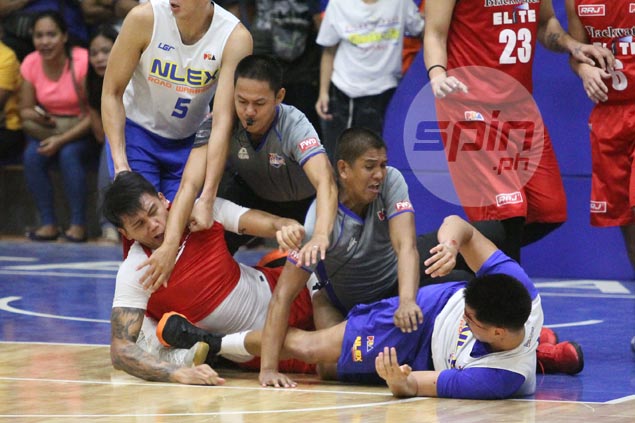 Miranda said he hasn't heard from Eram, although in an earlier story run by SPIN.ph, the lanky center from Ateneo bared he sent an apology through NLEX players Kiefer Ravena and Eman Monfort, both former college teammates at Ateneo.

His willingness to bang bodies and play physical should earn him the trust of coach Yeng Guiao, who likes his players tough.

The 6-foot-6 Miranda stressed he's just doing what is asked of him.

And this early, Miranda already likes playing under Guiao.

In his more than a month with NLEX, Miranda has yet to earn the ire of a coach known for his fiery temper.

Still, he knows that would be inevitable.