WHEN it rains, it pours for Barangay Ginebra coach Jeffrey Cariaso.

Just a day after a lopsided loss to GlobalPort sent Ginebra reeling out of the Magic 4 in the PBA Philippine Cup, Cariaso, sources said, also became one of the last cuts in the selection for the pro league's '40 Greatest Players' pool.

A source told Spin.ph that Cariaso - ironically also one of the last cuts in Tim Cone's Asian Games-bound Centennial Team back in 1998 - was one of the final eight players considered for the final five spots in the elite list outside the members of the '25 Greatest' list and the 10 league MVPs from 2000 to last season. 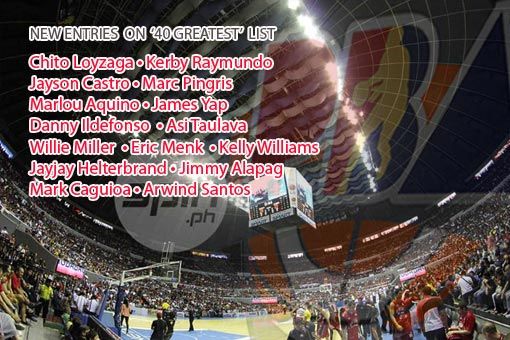 Reigning league MVP June Mar Fajardo was stricken out of the list after the selection panel decided to limit the honorees to players who have played at least five seasons in the league.

Aside from Cariaso, the other final cuts for places in the elite group that will be honored in April are 1999 Rookie of the Year awardee Danny Seigle and 1982 PBA MVP candidate Abe King.

The source revealed that before the nominees were pruned to eight, there were around 14 former PBA superstars that were considered by the panel which was made up of Robert Jaworski, Freddie Webb, PBA chairman Pato Gregorio, vice-chairman Robert Non, PBA Press Corps president Barry Pascua, columnist Quinito Henson and Cavite Rep. Elpidio Barzaga.

Aside from Cariaso, Seigle and King, also considered by the panel were Nelson Asaytono, Olsen Racela, Dennis Espino and Bong Hawkins.

The 15 new nominees will now join Jaworski and the other members of the '25 Greatest Players' cast.