IF you're feeling blue, you might want to seek San Miguel star Arwind Santos for advice.

On the court, Santos is a do-it-all forward who now stands alongside reigning MVP June Mar Fajardo in formidable San Miguel frontline. On Twitter, though, he embraces another role - that of life coach.

Using the hashtag #Swakwords, the former league MVP and part-time recording artist has of late been dishing off words of advice to his close to 70,000 followers on the micro-blogging social media site.

"May mga followers ako na minsan baka matapat sa kanila yung 'swak words' ko," said Santos when asked by SPIN.ph what the #Swakwords were all about.

Here are some of his #Swakwords:

Santos said the pieces of advice were mostly drawn from his own experience.

Santos said the idea for the tweets came out of nowhere, and he is pleased to hear that his fans appreciate his experiment.

But could this be just a prelude to another hit single for the player-turned-singer who has recorded original compositions like 'Bagyo' and Smoothy Ikaw Na?

So with no new single coming, let's settle for more #Swakwords from life coach Arwind Santos. 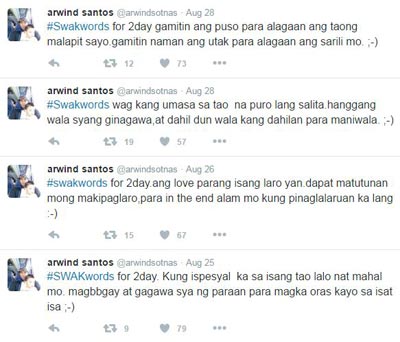