THE collapse of negotiations between Blackwater Sports and Danny Ildefonso has opened an opportunity for another PBA great in Marlou Aquino at the Elite camp.

Team owner Dioceldo Sy told Spin.ph on Thursday that plans are underway to hire the former Ginebra star and national player as big man's coach of the expansion ballclub - a role earmarked for two-time MVP Ildefonso until talks broke down over compensation issues.

"Everybody knows who Marlou Aquino is. He was one of the most dominant center of his time. The fact that he was mentored by the legendary Sonny Jaworski further made us think of a 'more interesting technology' transfer," said Sy, whose team will be coached by another former Jaworski player in Leo Isaac.

The Ever Bilena Cosmetics president, however, was non-committal when asked if the team would be willing to bring Aquino, 41, out of retirement. The 6-9 slotman's career ended when he was abruptly cut from the Meralco lineup three years ago.

Aquino had welcomed the possibility of playing again after Sy first tinkered with the idea of hiring him and another PBA legend, Kennth Duremdes, for his rookie team.

When reached for comment on Thursday, Aquino said he still feels the same.

The pride of Sta. Barbara, Pangasinan, a former PBA Rookie of the Year and many-time Mythical Team member, also said he continues to play in legends games and leagues around the country and overseas.

Aquino cited another veteran and former rival Asi Taulava, who, at 42, defied Father Time by earning a place in the pro league's Mythical Team last season. 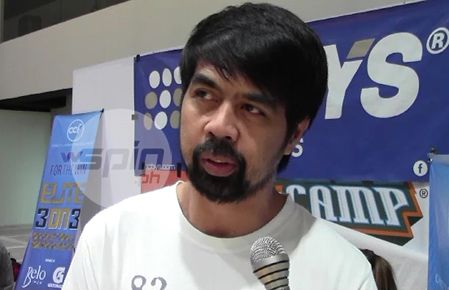 Asked if he can still bang bodies with Taulava, Aquino had a ready answer.

Meanwhile, Sy said he is set to convene his pool of officials and coaches to discuss the inclusion of Aquino in their coaching pool.

“Yes, I will meet with my staff tonight at my house. Then from there we will discuss the Marlou Aquino plan. I personally want him to be in the team,” said Sy.

Patrick Aquino, a good friend of Marlou, has been tasked to open negotiations with the PBA great.

Aside from newly acquired Jason Ballesteros, the Elite also have youngsters JP Erram and Frank Golla and undersized frontliners Pari Llagas, Gilbert Bulawan and Eddie Laure in their lineup.