SOMEHOW Marc Pingris’ concern is lessened to a certain degree.

Fresh from surgery for an ACL injury that will keep him out for the rest of the PBA season, Pingris said he appreciates the offer of Magnolia management to renew his contract with the franchise notwithstanding his projected comeback won’t be until the league’s 44th season.

The contract of the player from Pozzorubio, Pangasinan will end in August this year.

But just hours after undergoing operation at the St. Luke’s hospital, team board of governors Rene Pardo said Pingris is ‘good as signed’ next year.

Told about it, Pingris was almost emotional as he expressed how grateful he is to management of the franchise that has been home to him for more than a decade.

“Kahit papaano nababawasan yung iniisip mo di ba,” added the 36-year-old Magnolia vet who will be 37 when he could make his comeback in the next edition of the season-opening conference a year from now. “Hindi na rin naman tayo bata. Biruin mo six to eight months kang mawawala.”

The 13-time All-Star remains in an immobilizer, which he will continue to wear for the next two weeks. He’s scheduled for a check-up with renowned orthopedic surgeon Dr. George Canlas on Wednesday.

“Wala, puro tulog at rest lang,” he said when asked what keeps him busy while recuperating from the injury he suffered in the opener of the Hotshots’ semis series last week.

This is the second time Pingris went down with an ACL injury in 18 years after also hurting the same left knee while still with the Philippine Youth team in 2000.

And he recalled how it was difficult for him to recover back them.

Operating an ACL back then also took hours to complete.

Now, he has his entire family to lean on, most especially wife Danica.

And then, there’s his ‘other family,’ – the Hotshots.

Pingris admitted shedding tears when he saw on TV the entire Magnolia team wearing a small patch on the upper side of their playing uniform bearing his jersey no. 15. 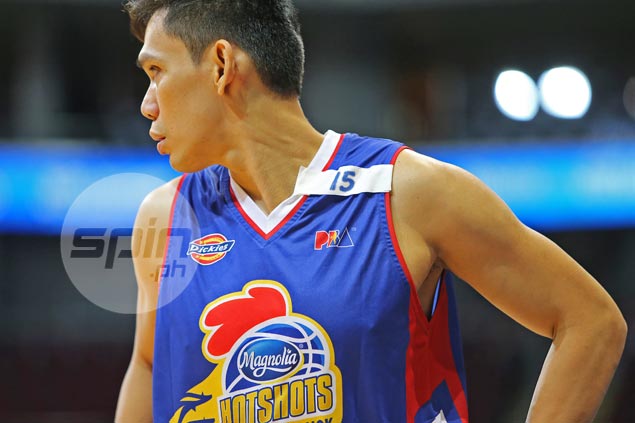 In as much as he wanted to watch the rest of the semifinals live – currently tied at 2-2, his condition wouldn’t allow him so, admitting his operated knee is still swollen and hurting from time to time.

Hopefully, the Hotshots reach the finals of the all-Filipino conference, by which time Pingris vows to be at the venue and personally cheer his team.

It’s the Hotshots’ turn to live up to the challenge of their fallen comrade.