MARK Macapagal is eyeing a record five titles in the Three-Point Shootout, but the deadliest shooter in the PBA All-Star festivities of the past five years is actually wary of a player who last won the crown a decade ago.

Jimmy Alapag, winner in 2003 and 2005, has been penciled in to see action in Friday’s event, and Macapagal feels everybody will be rooting for the Talk ’N Text skipper-turned-manager to win in his final All-Star stint. 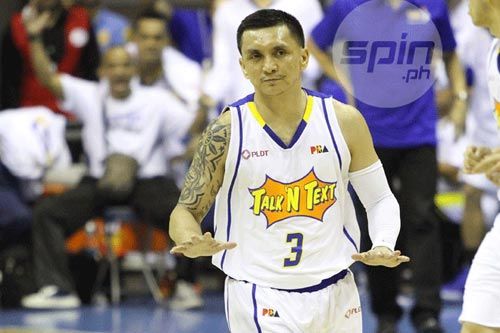 Two-time champion Alapag is among the top career three-point shooters in the league although he recently retired after 11 seasons with Talk ’N Text.

Also in the lineup are Purefoods Star’s James Yap, the 2009 champion, along with NLEX’s Nino Canaleta, runner-up in the 2012 and 2013 editions.

The 35-year-old Macapagal regained the Three-Point Shootout title in 2014, his fourth overall, after dethroning Rain or Shine’s Chris Tiu, the 2013 edition champion.

Tiu, the third-year pro, is doubtful for the three-point shooting contest after hurting his nose during Rain or Shine’s practice on Tuesday.

The sweet-shooting Macapagal, who owns a PBA career 33-percent accuracy from beyond the arc, said he has been taking 200 shots after every practice to keep himself sharp and ready.