IT was another case of the smallest guy making the biggest plays down the stretch.

And who can get enough of it?

Mark Cruz couldn’t have picked a better time to shine as he galvanized Star in its 86-73 victory over Mahindra on Wednesday that enabled the Hotshots to grab the last playoff spot in the PBA Commissioner’s Cup.

With James Yap, Alex Mallari, and Ronald Pascual out with injuries and Mark Barroca left with a boxer's cut above one eye by a first-quarter collision, the 5-foot-5 rookie playmaker scored a career-high 18 points built around three three-pointers, on top of two rebounds, one assist, and one steal in 22 minutes.

Coming into the game scoring just 13 points combined the entire conference, Cruz fired 14 points in the fourth quarter alone, to spell the difference in the do-or-die game.

The former Letran star and NCAA champion more than doubled his previous high of seven points he scored in the Philippine Cup against San Miguel Beer. 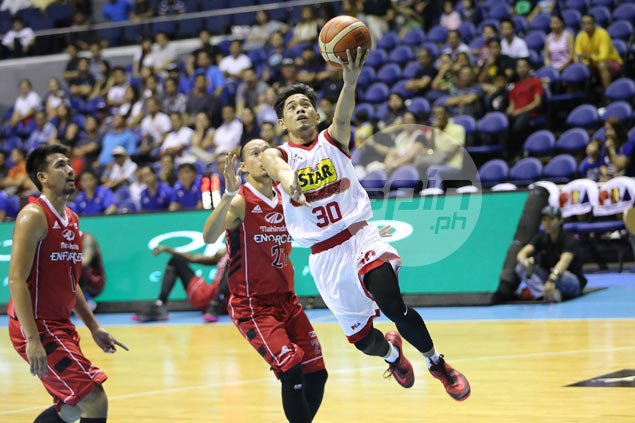 “This league is so tough that you're gonna need your tenth guy, your 11th guy, at some point in the conference,” the rookie coach added. “If you want to be successful in this league, you're going to have to get something from guys at the latter part of your lineup.”

“Although our success is small, making it only to the eighth spot, pero ang laking bagay na nadala ni Mark sa araw na 'to.”