IT was a surreal feeling which Mark Caguioa felt for the very first time in his 15-year pro career.

Caguiao and crowd favorite Ginebra, for once, felt like underdogs on Wednesday night as they battled boxing great Manny Pacquiao’s KIA Motors team in the PBA Governors Cup at the Astrodome.

“You can see KIA, they wanted to win the game for him (Pacquiao). Kasi pagdating niya, nag-iba sila (Carnival),” Caguioa told Spin.ph shortly after playing a key role in Ginebra’s 105-98 victory over the expansion franchise that spoiled the return of KIA's playing coach.

The win snapped the Kings’ skid after losing their first two outings in the season-ending conference as they forced a logjam in the middle of the standings with San Miguel Beer, NLEX, and Meralco, all with similar 1-2 records.

Caguioa, the one-time league MVP, stressed the Kings were the veteran team, but admitted that for the most part, it was obvious KIA was the one playing like a well-oiled machine.

“They were running more. Everyone is aggressive. Maski di naglalaro si Manny, they were very aggressive,” noted the Ginebra star. 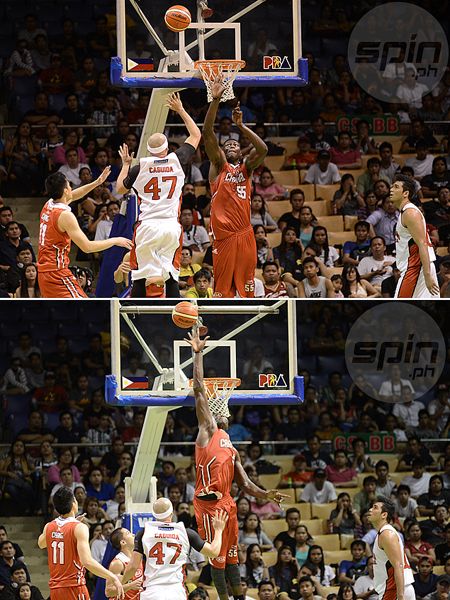 But Caguioa played a good supporting role to high-scoring import Orlando Johnson, providing a much-needed spark for his team by scoring 10 of his 16 points in a critical stretch of the fourth period that clinched rookie coach Frankie Lim’s first ever win Asia’s first play-for-pay league.

The 35-year-old Caguioa had to use his experience against KIA’s shot-blocker Hamady N’Diyae by converting all three of his looping shots against the seven-footer, pumping life into the injury-depleted Ginebra side.

Caguioa found time in the end to dedicate the win to Lim and Ginebra’s legion of loyal fans, who remained supportive of the Kings despite their seven-year title drought.

“I’m just glad that we won this for coach Frankie and for the fans. Coach Frankie has been with us for almost two months na and he’s been working as hard also,” he said.

“This win is wonderful,” he added.