Yet Mark Barroca didn’t mind, as Star emerged victorious in its do-or-die game against Mahindra, 86-73, in the PBA Commissioner’s Cup on Wednesday.

The Hotshots star point guard suffered a gruesome cut on his right eyebrow and a smaller one below his eye on a hit from Karl Dehesa early on, forcing him to play practically with one eye the rest of the game.

“Parang lumaban ako at nasuntok ni Manny yung mata ko,” Barroca said with a smile, referring to Pacquiao, who was still on his way back to the country after a rousing win over Tim Bradley over the weekend in Las Vegas.

the cut took five stitches to close, but that didn't stop Barroca from returning and providing the leadership as the Hotshots grabbed the last postseason berth. 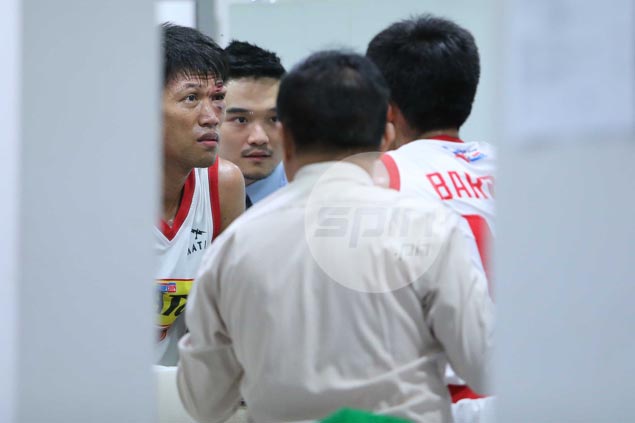 Hotshots coach Jason Webb admitted he would’ve forced Barroca to play through the injury given the circumstances.

“Even if he said no, I would beg him to play,” Webb said. “But Mark is not gonna say no anyway. The first time I looked at him, ang tanong ko sa kanya, ‘Sigurado ka ba? You can be honest with me.’ I wasn't sure kung kaya niya, because his eye is shut, sarado, and he still played well.”

Barroca really wanted to play on given the Hotshots’ backcourt woes.