Marc Pingris could be humming this classic ditty by the rock group Queen as he rides on his two-wheel bike on the way to practice of the Star Hotshots.

Yes, ‘Pinoy Sakuragi’ isn’t shy to admit he goes to the Ronac gym in San Juan from his house in Valle Verde, Pasig just by biking – the pedal-powered version and not the motorized vehicle so common today in the streets of Manila.

The veteran forward said he’s been into the hobby for a long time and of late, he included his travel from home to the team practice as part of his itinerary.

Other than being a hobby, he said riding the bike also serves as a cross training for him.

On free days, especially during the off-season, the 34-year-old Pingris would join his friends as they travel around the metropolis on a bike.

He’s been to the elevated roads of Antipolo, Rizal, and of late, Bulacan.

The native of Pozzorubio, Pangasinan said teammates such as James Yap and June Simon, along with Rico Maierhofer are among the players who are also into biking, although Yap and Simon have not tried going riding to practice riding on their bikes.

He did remember one incident though, when he got the ire of former Star coach Tim Cone for reporting to the gym in his old reliable bike while the Hotshots were in the middle of a PBA finals. 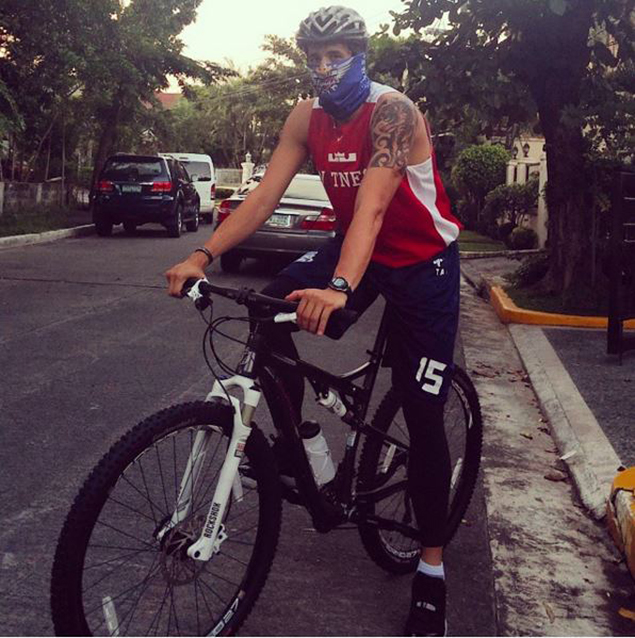 His wife Danica approves of his biking activities, but doesn’t want him to try one thing.

But Pingris admits a 6-3 guy like him will not find it easy to remain anonymous while traversing the streets of Manila.

And the thing that gave him away? His height.

So the next time you see a tall, well-covered, mestizo biker roaming around the crowded roads of Metro Manila, he just might be no other than Marc Pingris.