SINCE announcing his entry into the PBA as playing coach of Kia Sorento last May, bocing hero Manny Pacquiao has absorbed jabs from fans left and right.

Pacquiao admitted he is aware of the jeers from basketball purists, but the 35-year-old fighting pride said he’d rather use the negative criticism as motivation to prove himself as a basketball player, the same way he improved himself as a boxer.

[See Opponents give no quarter, Pacquiao expected none in PBA preseason debut]

The bible-preaching boxer bared that he will never harbor any ill feelings toward those who speak ill of him.

See a glimpse of Pacquiao in action:

Asked if the negative comments from fans motivate him to train harder in basketball like how he did in boxing when he was young, Pacquiao nodded.

Pacquiao again proved his drawing power when he drew fans to the Alonte Sports Arena in Binan, Laguna for their game against fellow expansion ballclub Blackwater Elite, which won, 88-77.

After playing in his first official tune-up game on Saturday with Kia, Pacquiao immediately flew back to General Santos City next morning the to resume his training for his upcoming fight with undefeated American Chris Algieri on November 23.

The soft-spoken Sarangani congressman bared that he intends to stay in GenSan to avoid any distraction ahead of the Algieri fight.

The development runs counter to the initial plan where Pacquiao is supposed to train at the posh Azure Residences compound in Taguig, where the Sorento team will also conduct daily practices.

The reigning WBO welterweight champion also revealed that except for Kia’s season opener against Blackwater Elite on October 19, he will skip the other games of the debuting PBA ballclub to focus on his next fight.

Pacquiao intends to immediately return to Kia practice and games after his Algieri fight, which boxing experts believe will have a big weight on future negotiations for his still anticipated pound for pound showdown with Floyd Mayweather, Jr. 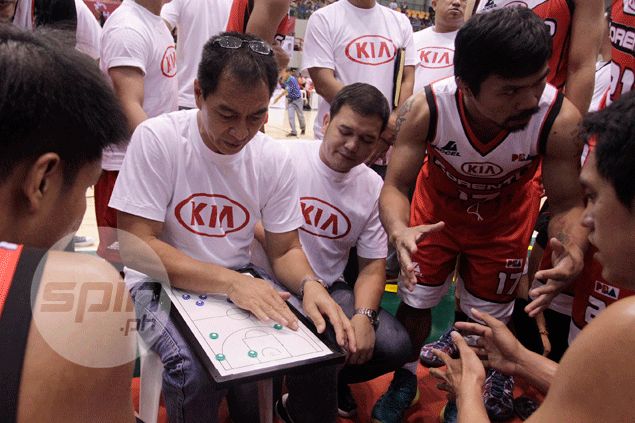