BARANGAY Ginebra fans have spoken. They want no less than Eat Bulaga’s emerging star Yaya Dub to be the team’s muse for the opening of the PBA’s 41st season this October.

Social media accounts of Ginebra fans have been flooded by requests to make Yaya Dub (Maine Mendoza in real life) the Kings’ muse ever since her onscreen love team with Alden Richards in the ‘Kalyeserye’ of the country’s longest-running noontime show rose to phenomenal heights. 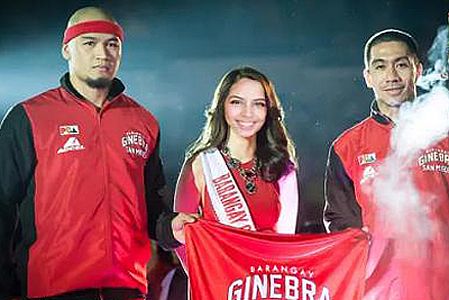 There are also fans who have been trying to trend the #YayaDubAsGinebraMuse hashtag on Twitter, hoping their request will be granted on opening day of Asia’s pioneering pro league.

Twitter user Miggy Santos recently wrote that he also wants Lola Nidora, Yaya Dub’s boss played by comedian Wally Bayola, to be with her if ever she’s chosen to become a muse.

“Expect Yaya Dub or Lola Nidora will be one of the PBA muses next season. Imagine Lola Nidora as GPort Muse,” Santos wrote at @itsme_sirmigs

Mendoza rose to fame for her videos on Dubsmash, a video messaging app that allows a person to choose a known voice clip which they can dub.

But her popularity reached greater heights when she starred in Eat Bulaga’s ‘Kalyeserye’ and became the love interest of Richards, which Lola Nidora disapproves of. 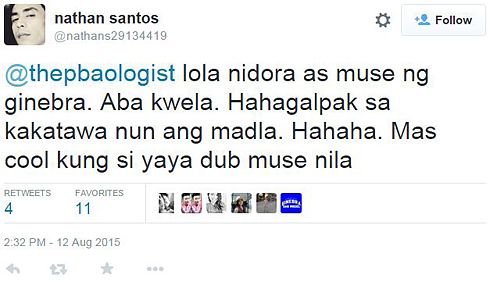 Another netizen, Nathan Santos, tweeted that having Bayola as muse of Barangay Ginebra will definitely bring the house down.

But Santos said he would also prefer Yaya Dub to be Ginebra’s muse.