rumor or fact
by Snow Badua

FACTS: As losses continue to pile up for Blackwater in the Governors Cup, the more we've been seeing comments from readers - both angry and humorous - accusing the expansion team of tanking games to do Talk 'N Text a favor in the coming PBA rookie draft.

You see, Blackwater has swapped first-round picks with Talk 'N Text in the 2015 rookie draft in a three-team trade early this season. And at the rate Blackwater is losing games, that draft is on track to be the No. 1 selection overall in a draft pool that is both deep and talent-laden.

It is bad enough that Blackwater, which finished last in the first two conferences of the season, is off to another 0-3 (win-loss) start in the Governors Cup. Worse, PBA fans have been hard on the team, accusing the Elite of deliberately losing games to ensure Talk 'N Text gets the top draft pick.

Blackwater owner Dioceldo Sy has addressed this issue in the past, vehemently denying that his expansion ballclub is a 'farm team' not only of Talk 'N Text but also of the two other ballclubs - Meralco and NLEX - under the umbrella of Manny V. Pangilinan's group.

But with the issue refusing to die - and the flames, in fact, fanned by recent events, we just had to ask Sy again.

Sy was just as vehement in denying that Blackwater is 'tanking' in the season-ending conference, saying he is having 'sleepless nights' over his team's continued struggles.

“Why should we tank? I’m having sleepless nights the whole week. I don’t know what hit the team,” said Sy, who was in Chinese Taipei with the national women's basketball team he is supporting on the request of the Samahang Basketbol ng Pilipinas (SBP), when reached by Spin.ph.

“We finished last conference (with a win) over Meralco and I'm looking for five wins this conference," he added.

Blackwater better start winning soon to allay the fans' suspicion, which started after the Elite acted as the third team in the trade that paved the way for the transfer of rookie Kevin Alas from NLEX - which earlier acquired Alas from Rain or Shine - to Talk 'N Text.

Blackwater swapped draft picks with Talk 'N Text in that trade and got the rights to Larry Rodriguez, a player it bypassed in the expansion draft, in return.

Over the next months, fans have found more and more reason to link Blackwater to the MVP camp, from the trivial (fans say that Blackwater's jerseys are very similar to Talk 'N Text's colors] to the serious [from the five trades entered into by Blackwater so far, four have been with MVP teams].

It did not help that from the players in Blackwater's lineup, most came from MVP teams, namely former Texters Rodriguez, Robby Celiz and JP Erram and ex-Meralco Bolts Sunday Salvacion, Chris Timberlake, Gilbert Bulawan, Bambam Gamalinda and Jason Ballesteros.

Aside from that, Blackwater's import in the last two conferences, Marcus Douthit, is closely linked to the MVP camp being a naturalized player for Gilas Pilipinas. 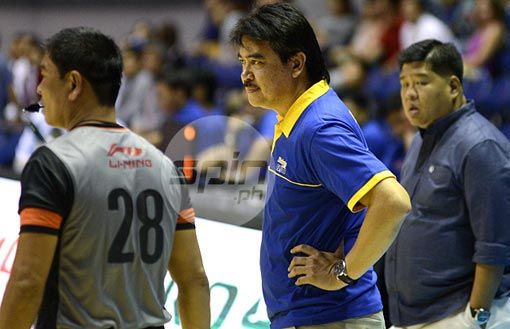 At the rate Blackwater is losing games, the No. 1 draft rights seemed a lock for Talk 'N Text. The Elite have lost their first three games by an average margin of 21.67 points and games against the top teams are coming up.

[See KIA still has chance to grab No. 1 draft pick from Blackwater. Here's how]

They lost to Barako (90-105), GlobalPort (76-100) and Alaska (80-106), prompting fans to question why management is not making any moves to improve the team at this point, like perhaps replacing Douthit or hiring an Asian import, unless it isn't too keen on turning around its fortune.

Head coach Leo Isaac, however, dismissed suspicion that the team is not out to win games.

Asked what seems to be ailing the team, Isaac gave a cryptic response.

For more on the interview with Leo Isaac, click HERE.