LARRY Fonacier believes he wouldn’t be the player that he is today in the PBA without the help of NLEX coach Yeng Guiao.

“Siya naman talaga ang nag-umpisa. Just give credit to him,” said the veteran gunner of his former mentor at Red Bull, with whom he was reunited at NLEX this conference following a three-team trade that also involved Meralco and Globalport.

Fonacier’s toughness especially in pressure-packed situations was in full display on Sunday night in the Governors Cup game between NLEX and powerhouse San Miguel.

The wingman out of Ateneo fired half of his 16 points in the fourth period, including two back-breaking three-pointers inside the final two minutes of a tightly-fought contest won by the Road Warriors, 103-100.

The endgame heroics of Fonacier naturally drew praises from Guiao, the same coach who gambled on him during the 2005 rookie draft when he was made by Red Bull as its second round pick (14th overall).

“Larry is vintage from eight or 10 years ago. He’s really playing well for us. He’s not only giving us the outside shooting and scoring, he’s giving us a lot of leadership and maturity,” said Guiao of Fonacier. 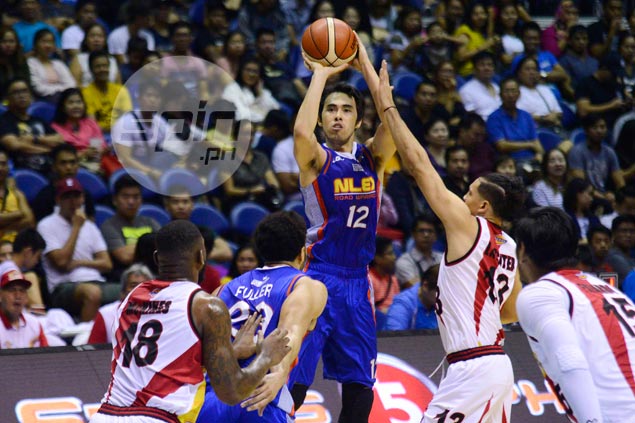 But being one of the veterans at NLEX, Fonacier knows very well the role he has to play with the team.

“He (Guiao) trained me to be ready for those moments. Pag matagal ka na dito sa liga, you welcome those moments and not be afraid to take those shots,” added Fonacier, who was 4-of-5 from three-point range, had four rebounds and three assists.

The Road Warriors improved their record to 6-2 overall, which by Guiao’s calculation, already assured the franchise of a berth in the quarterfinals.

That’s definitely a welcome development for a team that failed to get past the eliminations of the season’s first two conferences after registering a combined four wins in 22 outings.

“It means that we’re on the right track, that we’re able to compete at a high level,” said Fonacier.