SPECULATIONS continue to swirl around LA Tenorio as his numbers continue to slide this season, but one of his good friends remained unwavering in his belief that the Ginebra star guard will bounce back soon.

Part of the sellout crowd that saw Ginebra humiliated by Globalport in the curtain raiser at the Smart Araneta Coliseum on Sunday night, actor and matinee idol Rayver Cruz believes Tenorio will redeem himself and be back to his old self with Ginebra in no time.

Through nine games this season, Tenorio is averaging a career low of 6.44 points to go with four rebounds and 3.78 assists per game and has seen his minutes dwindle as Ginebra continued to slump after an impressive start to the PBA Philippine Cup.

These numbers are even way below his average back when he was still a struggling rookie guard at San Miguel Beer in 2006, where he tallied 8.19 points, 2.45 rebounds and 3.15 assists per game.

But for Cruz, Tenorio remains one of the key pieces in Ginebra's bid to snap a seven-year title drought.

Asked what seems to be bothering his friend who these days is a forlorn figure at the far end of the Ginebra bench during games, Cruz had no ready reply.

“Not feeling well siguro,” said the 25-year-old matinee idol before bursting into laughter. 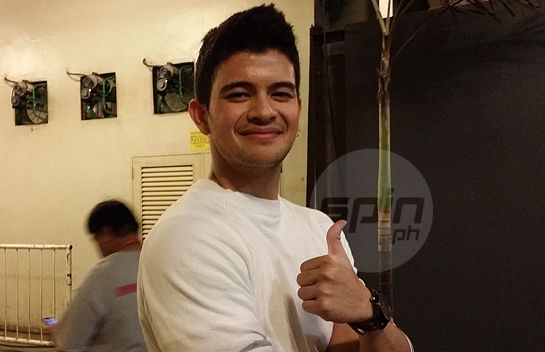 Meanwhile, Spin.ph has learned that Tenorio even had a rift with fellow Ginebra superstar Mark Caguioa during practice last month, in the weeks before the Gin Kings' form started to take a turn for the worse after a 5-1 start to the season.

The event was confirmed by several Ginebra sources but denied by coach Jeffrey Cariaso.

“I’m sorry, but there’s no rift in the team,” said Cariaso before hastily turning his back in a previous Spin.ph interview.

Meanwhile, Spin.ph conducted an 'on the street' and online surveys, where Ginebra fans gave mixed reaction on Tenorio’s continued stint for the league's most popular team.

Here's a video of the interview of Rayver Cruz and Cariaso:

Another fan, Ray Ryan Santayana, is even pushing for the #TradeTenorio hashtag to trend.

The #TradeTenorio hashtag has been piling up comments from fans, mostly from diehard supporters of Ginebra.

Longtime Ginebra fan Eva Soriano said she is not happy with how Tenorio has been throwing tantrums during games, especially whenever his teammates put to waste his assists by missing easy shots.

Ginebra fanaddicts elders Rhen Galang and Badette Lucanas do not share the view.

As for Lucanas, an active Ginebra critic on different social media networks, she’d rather see Ginebra keep an intact and solid lineup for a longer period to develop chemistry.

Here are some of the comments from fans: 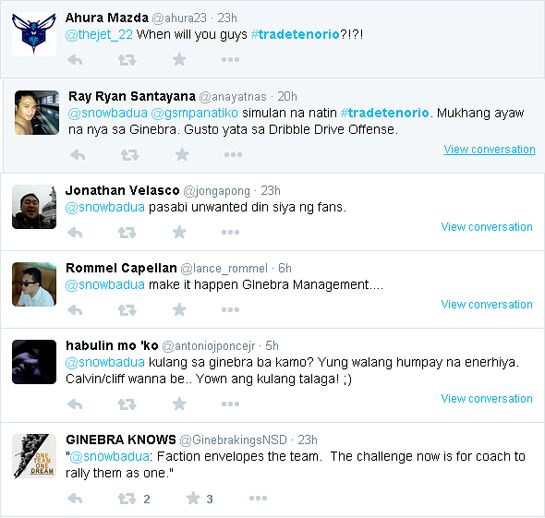