LOOK: LA Tenorio celebrates championship with two kids; third one is on the way

IF there's one player who wanted to win Wednesday's match more than anyone, it was LA Tenorio.

Tenorio didn't want the best-of-seven finale between Ginebra and Meralco to go to a rubber match on Friday as he and his wife Chesca are expecting their baby boy to come out on Thursday.

So the diminutive point guard pretty much did everything on Wednesday to help the Gin Kings hammer out a rousing 91-88 win and capture the 2016 PBA Governors' Cup champioship.

With a 25-point outburst, inCluding 21 in the last 24 minutes of the game, Tenorio was named Finals MVP of the series that saw also saw classic performances from Ginebra stars Mark Caguiaoa and Jayjay Helterbrand and, of course, the game-winner from Justin Brownlee.

But he also attributed his sterling performance to his teammates, coaches, and the fans who showed up even though there was an approaching typhoon. 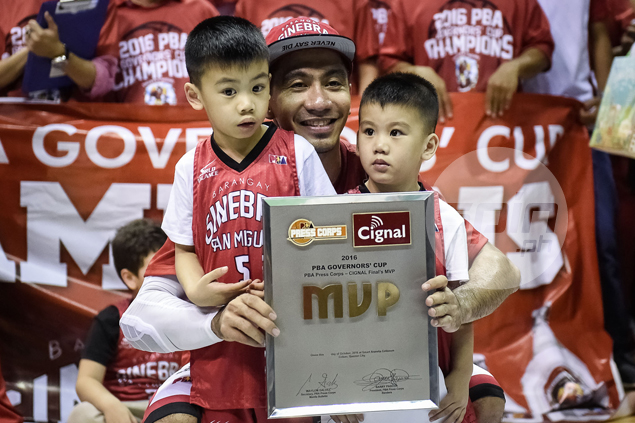 [See Helterbrand: 'If this is the way it ends, you can't script it any better']

Tenorio is now hoping this victory could be a springboard to more championships for the franchise, which has nine overall.

"Now that we got one championship with Ginebra, naramdaman na namin feeling pumunta ng championship, hopefully this will be the first sa dynasty na bubuohin namin sa Ginebra," he said.