BARANGAY Ginebra survived Talk ‘N Text, 73-71, and arranged a playoff with B-Meg for the last Finals slot in the PBA Governors’ Cup at the Smart-Araneta Coliseum on Wednesday night.

Cedric Bozeman scored just 14 points, but the import made the crucial defensive play down the stretch to help the Kings pull off the all-important win and complete the 4-of-5 incentive on the final day of the semis.

The Kings will now face the Llamados on Friday for the second championship berth and the right to face Rain or Shine in the Finals.

The low-scoring game obviously favored the Kings as both teams shot no more than 33 percent from the field. 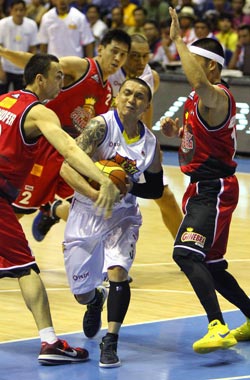 Mark Caguioa bounced back from a woeful outing to tally a team-high 18 points and eight rebounds while Kerby Raymundo added 15 points, including a rare three-pointer with three minutes remaining to give the Kings a 73-68 lead.

Both teams went scoreless in the next two minutes before Paul Harris blew by Rudy Hatfield and scored on a layup with 39.9 seconds left as the Texters threatened at 73-71.

But Harris turned into goat after Bozeman forced him to commit a lane violation while trying to drive from the base line in the Tropang Texters’ final possession with 3.9 seconds to go.

Nonetheless, the Talk `N Text import still had a solid game of 25 points and 18 rebounds to lead the Tropang Texters, who missed the Finals for the first time in six conferences.

No locals, however, scored in double digits for the Tropang Texters, with Ryan Reyes and Ranidel de Ocampo contributing just eight points apiece.

“I think limiting them was very crucial,” Tanquingcen added.

The Texters’ loss also marked the end of Chot Reyes’ tenure as Talk `N Text mentor as the five-time Coach of the Year will concentrate on the national team starting next season.