Kiefer Ravena on following dad's footsteps and playing for Star? 'I'll do my best'

KIEFER Ravena should be one of the most sought-after players coming out for the 2016 PBA Rookie Draft, the reason his most likely destination is the subject of animated speculation this early.

It is quite obvious the college star has deep ties with the Manny V. Pangilinan group, not only because of his five-year career with the MVP-backed Ateneo Blue Eagles but also his past stints with the national team formed by the group headed by the businessman-sportsman.

Aside from that, Ravena's dad, Bong, is now one of the assistants of head coach Jong Uichico at Tropang TNT, the flagship ballclub of the MVP group.

Still, the two-time UAAP MVP is not a lock to make it to Tropang TNT or any MVP-controlled team. That's just the nature of the rookie draft. The selections will still largely depend on the performances of the teams this season and the quality of the aspiring rookies coming out of the next pool.

And before we forget, the elder Ravena also suited up for Purefoods (now Star) from 1994-97 and, in fact, played some of the best basketball of his career with the now San Miguel-owned franchise.

So we begged to ask Kiefer the question?

Is he open to the idea of following in dad's footsteps and playing for Star? Or perhaps be the next face of the franchise after 'Cap' Alvin Patrimonio and current star James Yap?

Kiefer quickly distanced himself from the 'face of the franchise' tag but made it clear he will be happy to play for a franchise like Star which has a long, proud tradition.

“Shucks, Alvin Patriominio agad and a James Yap - very, very big shoes to fill," said the King Eagle when approached by SPIN.ph during Mighty’s debut in the PCBL. "But I’ll do my best, if ever I get picked by the Star Hotshots, my father played for them. It’s a franchise with tradition talaga. 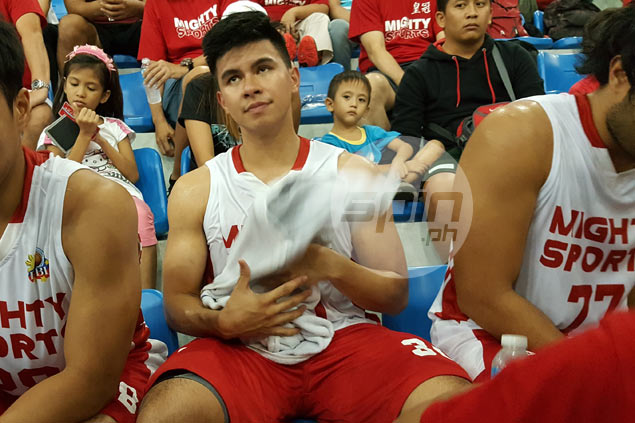 Ravena is clearly a student of the game and therefore knows the history of the Purefoods franchise, talking freely about the transition from Patrimonio to Yap.

But to be the next face of the franchise? That's far off, he said.

“Hindi naman sila nawalan talaga ng (high-profile player] from the time of Alvin Patrimonio, then the transition to James Yap, and you can’t underestimate the qualities of PJ Simon and Mark Barroca,” said Ravena, who is one of the most followed basketball celebrities on different social media platforms.

To best prepare himself for the PBA wars, Ravena is suiting up for Mighty Sports in the PCBL tournament where he tests his mettle against former pros. However, he knows that wouldn't be enough.

“This (PCBL) is one of them (preparations for the PBA), of course you can’t just say you have one preparation for the biggest league in the country. I will be playing against the best players in our country, gusto ko ready talaga ako when I play them,” he added.