COLUMBIA Autocar Corp. president Ginia Domingo has categorically denied rumors that boxing superstar Manny Pacquiao is set for a nine-figure pay for the next three years that he’ll be spending as playing-coach of the company's expansion PBA franchise.

Domingo, who was present during the second and final day of tryouts for the Kia team, told Spin.ph the reported P100 million paycheck for Pacquiao in his first three seasons in the pro league "is totally preposterous."

“Oh my God, that’s not true. That’s very stiff. Nothing like that,” Domingo stressed.

The soft-spoken automotive industry executive also guaranteed that Kia Motors has no plans of circumventing league rules as far as allowable salary for players is concerned.

“Actually, everybody has to conform to the PBA rules, may minimum at maximum. We have guidelines. But then, ang alam ko we have an obligation to submit (our salary book) to the PBA,” she said.

Domingo said she and Pacquiao haven't even had the chance to talk about his remuneration as a playing-coach since boxing's former pound-for-pound king is still preoccupied with forming a competitive team for the franchise’s maiden PBA season.

“Wala pa talaga. We still have to talk to Manny. As you can see, he’s so busy with the tryouts and he’s excited to take part in the PBA,” Domingo said.

Pacquiao supervised the team’s tryouts, where he was seen in constant dialogue with his coaching staff on who will make the next cut of the talent identification process. 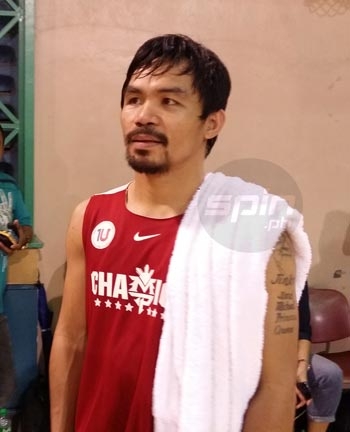 Even Pacquiao has denied rumors that he is bound for an eye-popping payday as playing-coach and endorser of the Kia franchise, saying he is only here "for the love of the game."

Kia team manager Eric Pineda also laughed off the reports, saying that the "money aspect is very immaterial in Pacquiao’s appearance with Kia."

“Sa totoo lang, kung ibabase talaga natin sa imahe ni Manny, where he is now, and how much he has to make based on his earnings and image … talagang malaki dapat. Pero sa amin, hindi namin pinag-usapan 'yan,” he added.

But will Pacquiao receive the maximum pay for a player like James Yap and the rest of the PBA stars?