Another PBA tune-up called off by refs as Barako Bull, KIA players nearly come to blows

ANOTHER PBA tune-up match was stopped on Thursday afternoon after a fistfight nearly erupted among players of Barako Bull and Kia Motors at the Green Meadows gym.

Veteran Barako Bull big man Dorian Pena and young Kia guard Joshua Webb were at the center of the incident after the 6-foot-8 Fil-Am got off the bench and engaged Webb in a heated verbal tussle.

Prior to the confrontation, the game had already been marred by elbowing, shoving, and trash talking by players from both sides, with KIA import Peter John Ramos figuring prominently in the exchange of words.

Pena had to be restrained by teammates and coach Koy Banal to prevent the altercation from getting out of hand.

Eventually, game officials decided to call off the game with only 21.7 seconds left and the Sorento way ahead, 74-59, marking the second time in as many weeks a tune-up match had to be stopped following last week’s Barangay Ginebra-Globalport exhibition game.

Terrence Romeo and Eman Monfort were both fined P30,000 each by commissioner Chito Salud for exchanging punches while Kelly Nabong was slapped with a P10,000 penalty for taking a fighting stance.

Banal however, pinned the blame on the referees for failing to put the game under control.

The Barako coach explained the referees seemed to allow Ramos and even diminutive Fil-Am guard JayAre Buensuceso to just talk trash and play dirty against his team.

“I was just trying to control myself, kasi yung attitude niya (Ramos), he was taunting the whole bench. At sabi nga ni coach Art (Dela Cruz), pina-FU niya ako, and he said, ‘They can’t guard me’. So parang trash talk.” 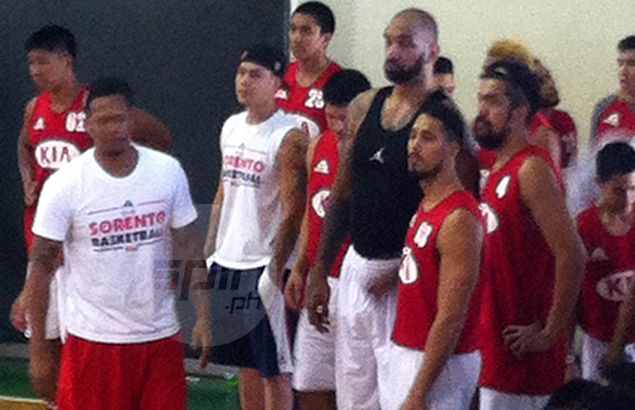 KIA top deputy Chito Victolero said the team has not been remiss in its reminders to Ramos about how physical the PBA’s brand of play is.

“That’s our goal, we have at least two tune-up games because we want to test his (Ramos) emotions also and his thinking. And okay naman siya, konting paalala lang,” said Victolero, who called the shots for the Sorento in lieu of playing coach Manny Pacquiao, who is currently in the United States.

Victolero believed that with Ramos’ extensive international exposure with the Puerto Rico national team and stint with the Washington Wizards in the NBA, the 7-foot-4 import can handle himself well in the mid-season conference.

KIA is scheduled to play GlobalPort in the kick-off game of the import-laden tournament that comes off the wraps this Tuesday at the Mall of Asia.