KEVIN Alas played down his run-in with Calvin Abueva as the NLEX playmaker had the last laugh with the Road Warriors coming out with a 100-92 win over Alaska in their PBA Commissioner’s Cup matchup on Wednesday night.

Off a box-out battle midway through the third quarter with the game tied at 60, Alas and Abueva got entangled on the floor and stayed there until the referees separated them after calling a double foul on both players.

Alas, a former Letran star, insisted it was nothing personal, having had encounters with the former San Sebastian standout in college.

Aces assistant Louie Alas was probably torn when he saw the commotion that involved his son Kevin and his Alaska ward Abueva.

But the veteran coach said it was “normal” for things to heat up between two competitors.

Was he referring to Calvin or Kevin?

“No comment,” the elder Alas said with a laugh. 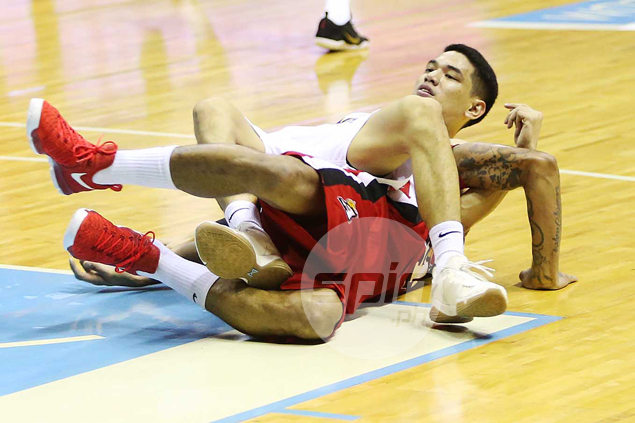 “Di ako tumingin (sa kanya) kasi baka may sabihin eh,” the younger Alas, who registered 11 points, four boards, one assist, and one steal in 26 minutes off the bench, said with a smile.

Alas and rest of the Road Warriors ended up smiling until the end as they finally grabbed that elusive first win after 10 tries this conference.

“I hope mag-continue kasi prepare na rin for the next conference,” he added.