AS he turned 25 on Sunday, Kevin Alas deemed it best to celebrate his birthday in an entirely different way. Specifically, in a meaningful manner.

The NLEX guard decided to do way with a birthday party and instead did an outreach program by spending time with people at the National Center for Mental Health (NCMH) in Mandaluyong City.

It was a morning of fun, laughter, entertainment, and lots of food on the side which the third year pro – along with his family led by parents, coach Louie and Lisa Alas – brought to the 88-year-old institution which serves as the country’s leading mental health care facility.

Kevin himself personally suggested to his mom for him to celebrate his birthday a bit different from the previous years.

He added it was his way of giving back to people for all the blessings he has been receiving in his young playing career.

A family friend eventually suggested for Alas to hold it at the NCMH.

The elder Alas disclosed it was his lovely wife, with the help of his son’s loyal fans, who arranged all the necessary things needed in the activity, held at Pavilion 14 of the NCMH as Kevin was in Cebu with the NLEX team for almost a week to participate in a pocket tournament, which the Road Warriors incidentally won.

Alas didn’t arrive in Manila until midnight of his birthday.

Along with his parents, Kevin was also joined by brother Kenneth, who plays for reigning NCAA men’s basketball champion San Beda, and Charlie Dy, a longtime family friend, who also represents the NLEX combo guard.

Doing outreach program is nothing new to the Alas family. Louie and Lisa have long been doing the same thing annually at the Elsie Gaches Villagein Muntinlupa City, a known refuge for children with special needs, just before Christmas.

The well-known basketball family is looking forward to doing more activities at the NCMH in the future, especially with Kevin being the first PBA player and personality to make this happen in the mental institution.

Personally, Alas said he has two wishes for his birthday.

“Long career and sana injury-free,” said the NLEX stalwart. “And siyempre, another championship.”

With a kind heart such as Kevin, it won’t come as a surprise if both wishes will be granted. 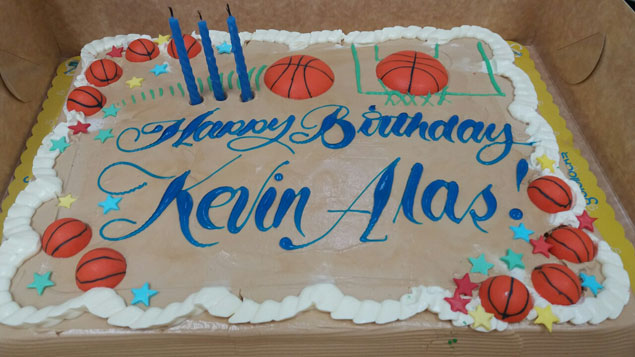