KENNETH Duremdes spent the early part of his PBA career with Sunkist after he was selected by the ballclub of the Concepcion family at No. 3 overall in the 1995 rookie draft.

But what would have happened if Duremdes was selected earlier? Let's see.

The 1995 PBA Draft featured a bumper crop of rookies led by Dennis Espino. The University of Santo Tomas star was the consensus No. 1 pick overall after a great college career studded with UAAP championships and an MVP award.

He was a shoo-in to be selected first by Sta. Lucia Realty.

The mystery, however, was in the No. 2 draft pick owned by Tondeña 65, now called Barangay Ginebra. Media reports in the days leading up to the draft bared the 65ers were deciding between Duremdes and Adamson teammate EJ Feihl. 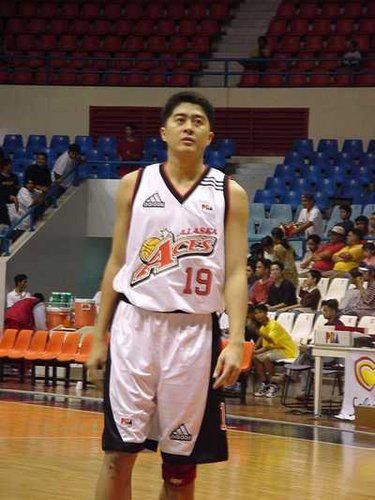 Draft day, January 8, 1995, also came amid talk that Tondeña 65 playing-coach Robert Jaworski would be leaving basketball to enter the political arena. Jaworski, however, told reporters after the proceedings that he was staying in the PBA.

Nevertheless, the 65ers went with height in the first round by picking Feihl in a move that, at that time, came as a surprise. Duremdes landed on the lap of Swift.

“The biggest surprise of the afternoon came from the 65ers when they selected 7-foot EJ Feihl as their opening pick over prolific swingman Kenneth Duremdes, who was immediately grabbed by Swift in its No. 3 right acquired from Shell,” wrote Manny Angeles in his draft recap for the Manila Standard. 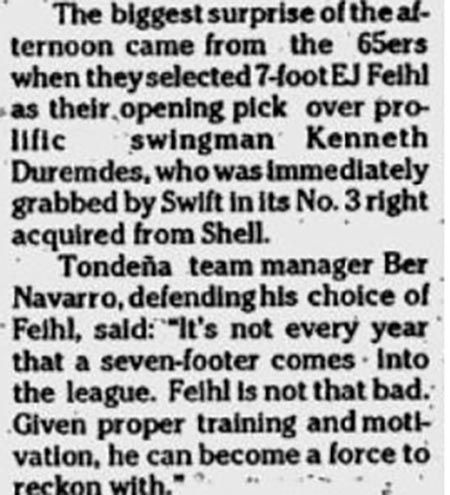 “It’s not every year that a seven-footer comes into the league. Feihl is not that bad. Given proper training and motivation, he can become a force to reckon with,” said Navarro as quoted by Angeles.

Instead of becoming a ‘ka-barangay’, Duremdes suited up for the RFM-owned franchise that carried the Sunkist brand in his first year. The high-flyer won two championships as a rookie while playing behind season MVP Vergel Meneses.

The Marbel native flourished after he was traded to Alaska, winning a season MVP and two Finals MVPs in 1998. He also made it to the RP Centennial Team, whose star-studded lineup put together by Tim Cone also included Feihl.

Duremdes also ended up becoming the highest-paid PBA player on record after getting an offer sheet from Mobiline worth as much as P80 million over eight years which Alaska matched before sending him in a trade to Sta. Lucia. 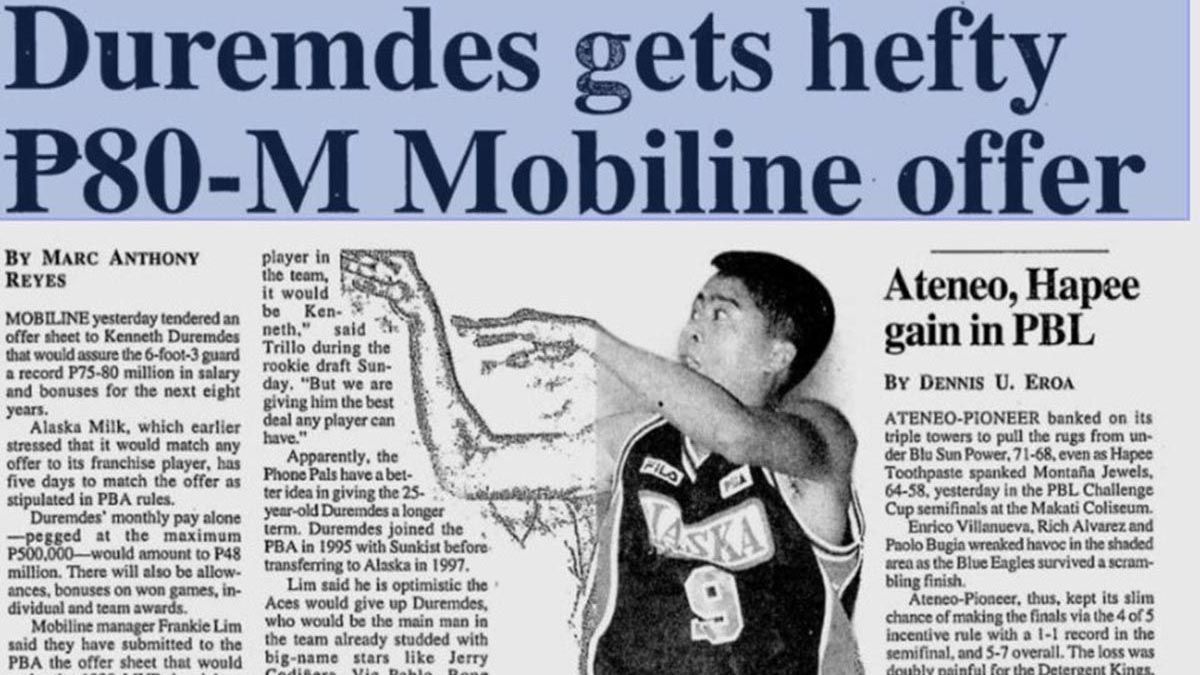 Duremdes, who won two Best Player of the Conference awards and six championships before his retirement in 2008, also made it to the PBA's elite list of 25 Greatest and 40 Greatest as a former MVP.

The giant spent just two seasons at Ginebra before a dispute over a contract extension led to his trade to Purefoods for Cris Bolado. He played four seasons with the Hotdogs then returned briefly to Ginebra. He had brief and largely uneventful stints with Alaska, Red Bull and Welcoat before his retirement in 2007.

That we would've loved to see.