ONLY a disaster can stop June Mar Fajardo from going home with a record fourth straight PBA MVP award.

The young San Miguel center is poise to run away with his fourth consecutive MVP title on Friday - a testimony of how he has dominated Asia’s first-ever play for play league since being made the No. 1 pick overall in the 2012 rookie draft.

Fajardo, 27, is set to lead the top individual honorees in the PBA’s 42nd season as the league holds its annual ‘Leo’s Award’ just before Game Four of the Governors Cup Finals between Barangay Ginebra and Meralco at the Smart Araneta Coliseum.

Aside from the MVP, also to be feted are members of the Mythical first and second teams, All-Defensive Team, nd winner of the Rookie of the Year, Most Improved Player, and the Sportsmanship awards.

But the humble, 6-foot-10 native of Cebu is expected to grab the spotlight as no one in the rich history of the PBA has won the MVP trophy in four successive seasons.

And the way he’s been playing, there’s no doubt this year’s award won't be the last for the outstanding University of Cebu alumnus.

"For me , he is a rare Filipino athlete who comes to the PBA once in a blue moon. He has the skills set to be the best among the best in any era," SMB team manager Gee Abanilla said.

Owing to another impressive season by San Miguel that saw the Beermen ruled the Philippine and Commissioner’s Cup before falling short of a grand slam in the Governors Cup, Fajardo was a consistent leader in the statistical points race.

Perked up by his Best Player of the Conference award in the all-Filipino conference, the San Miguel stalwart finished the season with a total of 38.58 statistical points to lead by a mile over closest pursuers and teammates Alex Cabagnot (32.96) and Chris Ross (32.01). 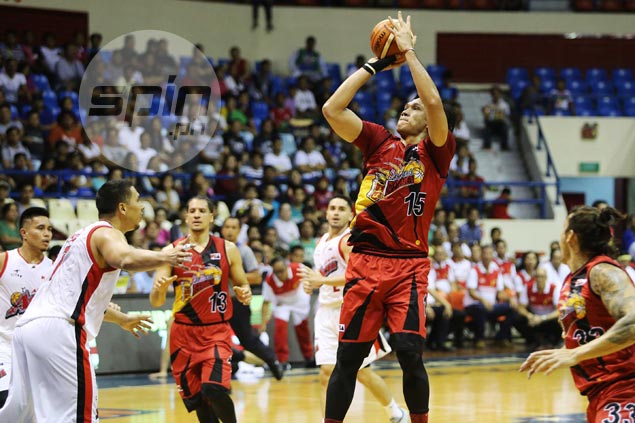 Aside from statistical points, also part of the MVP and other awards tabulation are the votes coming from the members of the media, players, and the PBA Commissioner's Office.

Fajardo is likewise set to lead the Mythical first team where Cabagnot, Ross and another San Miguel teammate in Arwind Santos hope to join him and become the first four players from the same team in the entire history of the league to make the elite group.

Meanwhile, the fight for the Rookie of the Year award is a toss-up between TnT Katropa’s Roger Pogoy and Matthew Wright of Phoenix while the Most Improved Player award is contested by Ross and Meralco sophomore Baser Amer.