CEBU CITY – Standing at a massive 6-foot-10, with nimble footwork and a deft shooting touch, it’s not hard to see the uniqueness of San Miguel star June Mar Fajardo.

But what truly puts the Cebuano big man in a class of his own, says his former teammates, is his innate humility and reluctance to embrace stardom, which was on full display during his Cebu homecoming for the Beermen’s out-of-town match against the GlobalPort last weekend.

Playing for the first time in front of his hometown as a professional, Fajardo seemed meek and almost ashamed to soak up all the adulation. After all, it was not so long ago when he was leading the University of Cebu Webmasters to back-to-back titles in the Cesafi.

GlobalPort practice player Luigi Bercede, Fajardo’s teammate in the 2010 Cesafi-title winning squad, said he isn’t surprised by the gentle giant's humility, as he has seen it many times before.

Bercede shared an anecdote about Fajardo’s burning desire to pursue his basketball dreams which lay below his humble exterior, back then in college.

“Naalala ko nga noon, we were hanging out outside of the dorm when this sports car sped past us. Sabi nya sa akin, 'Huwag kang mag-alala Luj, balang araw, makakabili din tayo niyan.'” 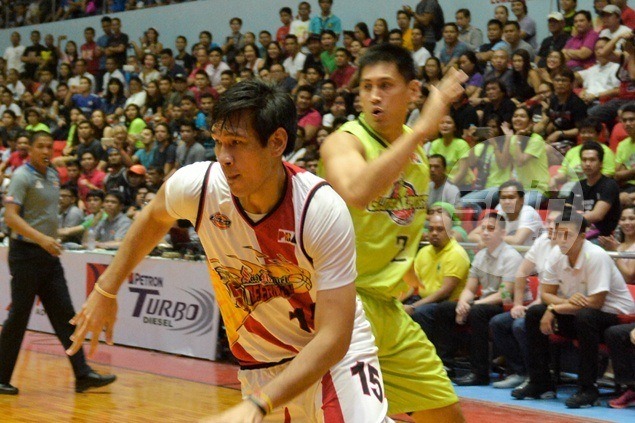 Three MVP awards later, one would understand if Fajardo grew tired of all the photograph and autograph requests from his legion of fans across the nation. But Kirby Cabrera, another former teammate, said Fajardo told him that that will never be the case.

“He told me na it’s perfectly alright and that he always has fun with the fans. I asked him if he ever considered getting a bodyguard with all the attention that he commands. He told me that why should he? Wala naman silang makukuha galing sa akin,” Cabrera recalled with a laugh.

Asked why he is what he is, Fajardo gave all the credit to the guidance of his parents, especially his mother, Maritess.

“Nothing has changed. I’m the same person. The only difference is that I’m now playing in the PBA,” shared the proud son of the town of Pinamungahan.

As the interview concluded, Fajardo rose and went to join his teammates for their shootaround but not before getting asked about his shoes and why he wasn’t endorsing the flashier models that some of his teammates had on.