JUNE Mar Fajardo moved closer to becoming the first player to win the MVP award in three successive years as he continued to lead the statistical race this PBA season.

The two-time reigning MVP has registered 39.5 average statistical points (SPs) through the end of the Governors' Cup quaterfinals, putting him ahead of closest pursuers Jayson Castro (34.7) and Terrence Romeo (33.5).

If he sustains the lead, Fajardo will also join Mon Fernandez, Alvin Patrimonio, and Bogs Adornado as the only players to win the top individual plum at least three times. Fernandez and Patrimonio won it four times.

The MVP race criteria, apart from the statistical tally (40 percent), also includes votes from the media (30%), players (25%), and Commissioner's office (5%).

But more than the statistical lead, San Miguel's sustained success in the Governors Cup - and Calvin Abueva and Alaska's failure to make the semifinals - is a bigger boost to Fajardo's MVP bid.

From the four other players in the Top Five, it was only Abueva whose team was having a better season than Fajardo's until the Aces made a quick exit in the Governors Cup.

Now Castro looms as the only threat to Fajardo's shot at history. However, his team, TNT Katropa, failed to reach the semifinals in the season's first two tournaments.

No. 3 Romeo and No. 5 Stanley Pringle of GlobalPort made the semifinals just once this season

The 6-10 Fajardo won Best Player of the Conference honors after leading the Beermen to the Philippine Cup championship and is locked in a close race with Castro for the BPC award in the season-ending conference.

Troy Rosario leads the Rookie of the Year contest, ahead of Chris Newsome and Art dela Cruz.

Here's the full list of the leaders in the MVP statistical race: 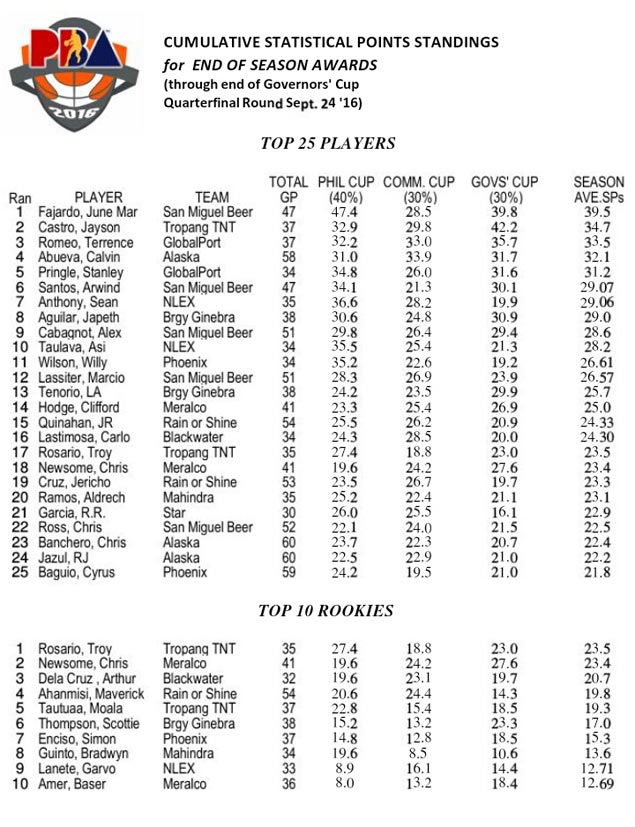