Fajardo, Slaughter neck and neck in stats race for Best Player of the Conference award

IT’S a neck-and-neck battle between giants June Mar Fajardo and Greg Slaughter for the Best Player of the Conference plum of the Smart Bro-PBA Philippine Cup.

The 25-year-old Fajardo has now overtaken the 7-foot Slaughter in the race for the top individual plum of the all-Filipino tournament, but leads by the slimmest of margins at the end of the elimination round.

The San Miguel franchise player took the No. 1 spot with a total of 45.6 statistical points (SPs), just 0.3 points ahead of the second-running Barangay Ginebra center (45.3 SPs).

Fajardo averaged 23.1 points per game and 14.4 rebounds per outing as he steered the Beermen to an outright semifinal stint as the No. 2 seed.

The 27-year-old Slaughter, who led the BPC race halfway through the elims, though continues to lead the league in both scoring (23.5 ppg) and rebounding (15.0 rpg).

NLEX do-it-all forward Sean Anthony is looking to crash the Fajardo-Slaughter party as he rose to No. 3 with 37.4 SPs. The Fil-Am forward is averaging 20.4 ppg and 11.4 rpg and scored a career-high 37 points as the Road Warriors denied the Rain or Shine Elasto Painters an outright Final Four berth, 111-106, just a week ago. 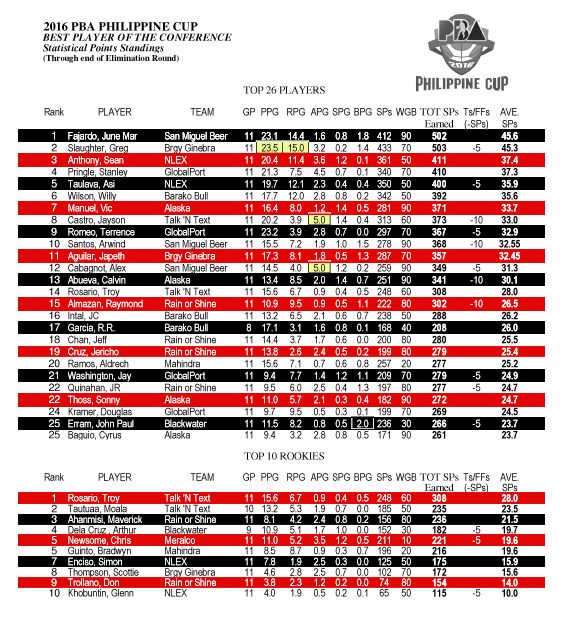 Two blue-collar players in Willie Wilson of Barako Bull and Alaska’s Vic Manuel are also making a case for the award by occupying sixth and seventh spots, respectively. Wilson has 35.6 SPs, followed by the 33.7 SPs of Manuel.

The undersized Energy forward is one of five players in the Top 10 averaging in double-doubles with 17.7 ppg and 12.0 rpg, while the rejuvenated Manuel submits numbers of 16.4 ppg. and 8.0 rpg.