SEVILLE, SPAIN - June Mar Fajardo said he wasn't aware of any online clamor to give him more playing time in the 2014 Fiba World Cup - and like a good soldier, he would have none of it.

"Wala akong alam, offline ako," the Gilas Pilipinas slotman told Spin.ph on Tuesday at the lobby of the Barcelo Renacimiento Hotel just after a short weights training session, a day after the Filipinos dropped an 81-85 loss to world No. 3 Argentina. 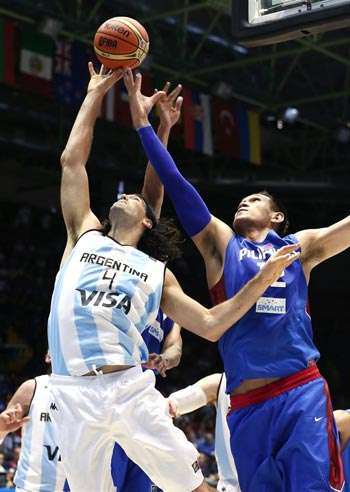 Fajardo's playing time has come under scrunity as he starts to come into his own in the Gilas program, putting in a couple of big games including a six-point, two-rebound performance while battling the likes of Luis Scola and Andres Nocioni in just 9:13 minutes on the floor.

No wonder basketball fans feel he deserved to stay longer on the court - and certainly should've played in the second half of the Argentina game.

[See Argentina given a scare by fighting Gilas side]

However, the 6-10 former University of Cebu star was quick to brush off the issue of playing time, saying such matters are better left to the discretion of Gilas coach Chot Reyes.

Fajardo said Gilas will never hear a word from him about playing time.

[Chot Reyes: Fajardo will be used when the game situation calls for it]

Fajardo admitted he took a lot of time finding his feet in the Gilas program because he struggled to get used to his back-up role to Andray Blatche where, unlike in the PBA where he had all the time to find his rythm, he had to go hard the moment he steps on the floor.

Fajardo, however, made it clear he is ready to step up if given a lot more exposure on the floor, especially with naturalized player Blatche struggling with tendinitis on his knee.