AS San Miguel Beer crossed the half-court line, set to break the TNT Katropa press, June Mar Fajardo received a pass from Marcio Lassiter and went for a rare slam dunk before hanging on to the rim for a few more seconds that sent the SMB bench rocking.

There was still over eight minutes left on the clock then, but one could sense the party was on for SMB.

Banking on a second-half surge, the Beermen blew past the shorthanded Texters, 96-83, in a Game Seven bereft of drama on Monday night to advance to the PBA Philippine Cup Finals.

Fajardo flirted with another 20-20 game as the reigning MVP tallied 22 points and 19 boards to lead the Beermen to the blowout victory that sustained their quest for a third straight all-Filipino championship that comes with a Perpetual trophy. 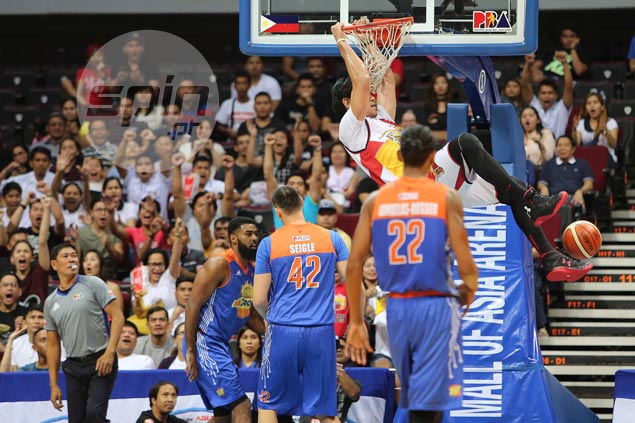 The Beermen overcame a 3-2 deficit in the best-of-seven series as they pounced on the absence of injured TNT superstar Jayson Castro in the deciding game after benefiting from the absence of Troy Rosario, who married college sweetheart Mich on the same day as Game Six.

“Kung may team na kinatakutan namin, it’s TNT because they’re loaded, but in Game Six, wala si Rosario, then tonight they were without Castro,” he added. “It’s a big factor for us.”

SMB is now waiting for the winner of the Final Four series between fellow sister squads Star and Ginebra that’s set to end on Tuesday night.

The undermanned Texters managed to stay toe to toe with the Beermen in the first half that ended with TNT trailing by just two points.

But the Beermen turned it up a notch in the third period where they outscored the Texters, 36-21, behind Chris Ross, the reigning Defensive Player of the Year who turned aggressive on offense by scoring 11 of his 18 points in the quarter. He completed an all-around effort with 11 assists, six boards, one block, and one steal in 44 minutes.

Arwind Santos finished with a game-high-tying 22 points on top of 13 boards as he conspired with Fajardo in the payoff period in bringing the Beermen to their fourth finals appearance over the last seven conferences.

Larry Fonacier and Roger Pogoy led the Texters with 14 and 13 points, while Kelly Williams chipped in 11 points and 14 caroms in a losing effort.