SAN Miguel Beer may be out of the title picture, but June Mar Fajardo’s stellar play all season may yield dividends as he continues to lead Air21 veteran Asi Taulava by a wide margin in the statistical race for the Most Valuable Player award in the PBA’s 39th season.

Fajardo continues to lord it over the field with 37.6 points, way ahead of the 41-year-old Taulava's 32.0 in the statistical race that will comprise 40 percent of the MVP balloting, with votes from fellow players (25 percent), media (30 percent) and the Commissioner's Office (five percent) rounding out the tally.

The sophomore San Miguel big man, who incidentally is on pace for a second Best Player of the Conference award this season, managed to keep his lead in the MVP race due to his solid season numbers of 16.7 points, 14.1 rebounds and 2.0 blocks - all PBA career-highs.

Fajardo won his first BPC award during the Philippine Cup, helping the Beermen, then known as the Petron Blaze Boosters, to a semifinal finish.

However, the Beermen have since bombed out in the last two conferences of the year, falling at the quarterfinal stage both times.

If he goes on to win the MVP, Fajardo will become the first player since Ginebra star Mark Caguioa in 2011 to win the league's highest individual award without reaching the finals - or much less winning a championship - during the season.

The 6-foot-9 Taulava, on the other hand, averages 14.9 points and 12.4 rebounds this season for the Express, but his MVP and Best Player of the Conference hopes depend largely on how far he can take the team in the current Governors Cup playoffs.

Curiously, no member of the grand slam-seeking San Mig Super Coffee is in the top 10 for the MVP this season.

Below is the complete MVP tally: 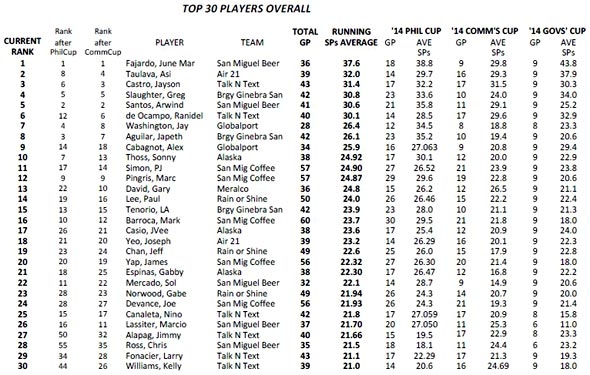