FORMER GlobalPort shooting guard Jaypee Belencion was busy the whole Friday as he evacuated his family and all their belongings to higher ground while helping out neighbors in distress on Pureza St. in Sta. Mesa, Manila.

It has been like this for the Belencion brood each time a strong typhoon hits Manila. 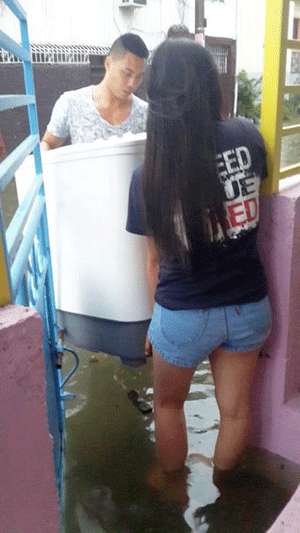 Belencion no longer takes chances when it comes to typhoons; not after the horror of Ondoy back in 2010 which struck Manila while he was playing in a league in Cebu, leaving wife Nikki and then one-month-old daughter Dominique alone to deal with the floods.

Despite concern for their own safety, Belencion, according to wife Nikki, still managed to come to the aid of neighbors at the height of the flooding which reached waist deep in their place on Friday morning.

By Saturday, the worst of the flooding was over, but Belencion has one other worry. He is still without a team in the PBA and he has been trying out for the past two weeks hoping to land a spot in new ballclub NLEX Warriors.

The 28-year-old former Letran Knight acquited himself well in a short stint with GlobalPort, exploding for 21 points in one game and making the most of the few opportunities he got off the bench.

Belencion, however, failed to hold on to his place at GlobalPort and is now hoping for a new lease on life.