Is Joseph Yeo on the trading block yet again? All signs point to another move by GlobalPort guard

IS Joseph Yeo on the trading block yet again?

All signs point to that happening, again, after sources contacted by Spin.ph revealed the high-scoring former De La Salle star is being offered to different teams by GlobalPort management.

Speculations about a possible trade involving Yeo has mounted over the last few weeks after the well-travelled unorthodox guard's playing time dwindled drastically in the ongoing Commissioner's Cup.

From an average of 24.95 minutes last season, Yeo has only logged 18 minutes a game in the midseason conference, even sitting on the bench the whole time in Globalport's game against the Meralco Bolts last Sunday.

Sources told Spin.ph the management of Globalport was unhappy with the below-par performance of Yeo during the team’s controversial Philippine Cup playoff game against Barangay Ginebra, where he finished scoreless.

The transfer of Yeo became even more imminent after the Batang Pier acquired Phoenix guard Jeric Fortuna - a trade which GlobalPort team owner Romero explained in a cryptic message that went: “I love players who die for the team.”

Romero himself also hinted on his official Facebook page last Tuesday about a possible trade or benching of one of his veteran players. 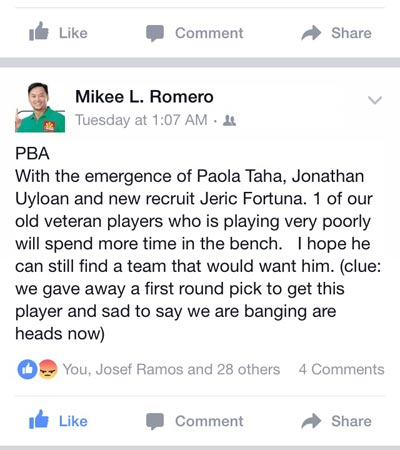 “With the emergence of Paolo Taha, Jonathan Uyloan and new recruit Jeric Fortuna, 1 of our old veteran players who is playing very poorly will spend more time in the bench,” said Romero, who is the only team owner in the PBA who openly criticizes his players on social media.

“I hope he can still find a team that would want him. (Clue: We gave away a first round pick to get this player and sad to say, we are banging our heads now),” added the outspoken team big boss.

Facing the prospect of being traded for the fifth time in a year, Yeo has so far refused to comment on his present ordeal with GlobalPort, or even on the statements posted on social media by Romero.

But a person very close to the former Xavier high school star bared Yeo is looking at the positives rather than dwell on the negatives of yet another trade.

Another source told Spin.ph that if ever Yeo will be traded, he might be shipped to any of the three San Miguel Corp. teams, most probably a return at Ginebra which needs a steady outside shooter.

Meanwhile, Yeo’s former assistant coach at La Salle and Air 21, Tonichi Yturri, bared that for nearly two decades, he had no problems with the player’s attitude.

In fact, the former PBA center and Northern Consolidated mainstay bared that if put in the right team, Yeo can still be one of the deadliest scorers in the league today.

“You just have to manage his time, not necessarily make him sit on the bench. Dapat alam mo siya gamitin sa laro, magaling yung bata na yan and he has proven it with us several times lalo na nung time namin sa La Salle,” he added.