Jio Jalalon, all 5-9 of him, shows he can crash the boards as well as college rival Scottie Thompson

JIO Jalalon did a Scottie Thompson on Thursday night, showing he can crash the boards as well as his college rival as he emerged as one of the sparkplugs in Star’s 78-74 win over Ginebra in Game One of their PBA Philippine Cup semifinal series.

The 5-foot-9 rookie playmaker hauled down nine rebounds, including three on the offensive end, as he collected the second most rebounds in the team, next only to the 12 of veteran teammate Marc Pingris.

The former Arellano star was quick to shrug it off.

Thompson, who engaged Jalalon in numerous battles in the NCAA, collared one more rebound than his college rival, but the latter had the last laugh.

Jalalon also bounced back offensively as he tallied six points on 3-of-8 shooting, two steals, and one assist while not committing a single turnover in 20 minutes off the bench after going scoreless, missing all his 10 shots in 24 minutes, in the two rivals' Christmas Day game in the eliminations.

[See Ginebra not the same without 'leader' Devance, says Barroca]

Jalalon also took turns with his fellow pesky point guards in limiting the production of LA Tenorio, who was held to eight points just days after a career-high-tying 31 markers. 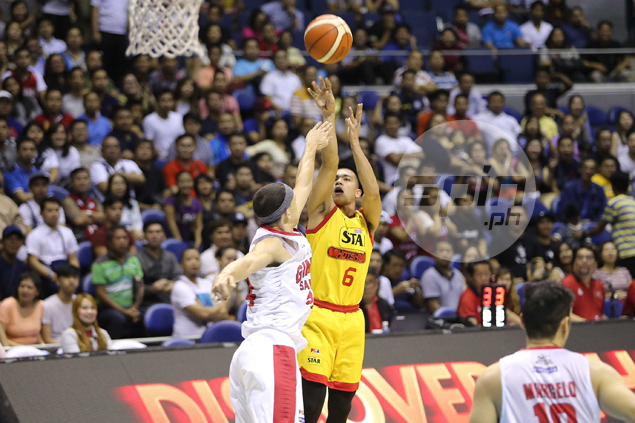 Jalalon certainly brought the “ligang labas” mentality he vowed to bring to the playoffs.