SURPRISINGLY, stepping away from the game he loves the most didn't turn out to be a difficult decision JayJay Helterbrand anticipated.

He was ready for it.

"I'm prepared for it. It wasn't difficult for me," the longtime Barangay Ginebra star told SPIN.ph on Monday after he officially announced his retirement from basketball.

The 41-year-old former PBA MVP made the announcement a day after Ginebra retained the Governors Cup title after beating the Meralco Bolts, 101-96, in Game 7 before a record crowd of 54,086 at the Philippine Arena in Bocaue, Bulacan.

Helterbrand told his teammates about his retirement plans on Saturday when Ginebra had a team dinner with San Miguel Corp. president and CEO Ramon S. Ang.

"I told it to them last Saturday when we had our (team) dinner," said the Fil-Am veteran. "I thanked Boss RSA, Boss Alfrancis (Chua) and the SMC management for their support."

Technically, Helterbrand played his final game in the league in Game Four of the title series, which the Kings unfortunately lost, 85-83. He suited up for nine minutes and finished with two points (1 of 2 from the field), two rebounds, and two assists.

Still, he went out a winner in his 17-year pro career - all with Ginebra, who signed him as its direct rookie hire in 2000.

Helterbrand said the championships he won with the league's most popular ballclub are the ones he considered the memorable ones - not the individual accolades.

"I think it's the championhips I've won because it tells a whole lot about yourself and the team. I've won a lot of individual awards but its the championships that are the most memorable.

And how would he want the Ginebra and basketball fans to remember him?

"I want to be remembered as someone who's compettive and someone who inspired people," said Helterbrand. 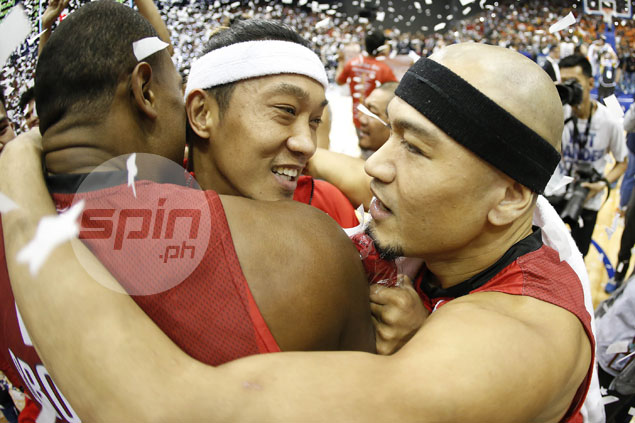 The popular guard said he'll definitely miss the camaraderie he had with the team and the banter with teammates especially during out-of-town games.

But Helterbrand believes this is the perfect time to finally walk away.

"I'll just go away from the game for a moment. Perhaps do business, and spend more time with my family," he stressed.

No more basketball for him?

"Perhaps coaching," he said. "But for now, no basketball."