Here are four Ginebra players who face being traded. Should these Kings be let go?

AFTER a coaching rigodon, a player shake-up is in the offing as Barangay Ginebra looks to finally address the woes of a team that has not lived up to expectations over the last few seasons.

A source told Spin.ph that newly appointed coach Frankie Lim is looking for ways to streamline the roster of Ginebra, which is adorned with a lot of superstars that often play redundant roles.

And hold your breath: Among the Ginebra players who sources are on the trading block are former league MVP Jayjay Helterbrand, forward Mac Baracael, high-scoring guard Joseph Yeo and starter LA Tenorio.

Although he denied knowledge on any possible deals involving the four, Lim told Spin.ph that he is open to getting the best talent who can improve the team, or perhaps two first-round picks in the coming draft.

[See Lim explains decision to get Dave Marcelo, and not Jake Pascual, from Barako in Mamaril trade]

Another source bared that Lim is eyeing to tab former San Beda star guard Garvo Lanete, who is expected to be part of the next rookie pool after pulling out of last year's draft. 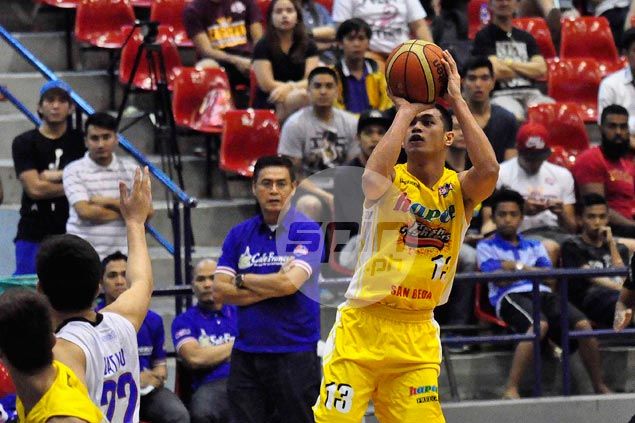 In a Spin.ph interview on Monday, Lim denied there are pending trade deals on his table, saying he is at this point focused on developing the conditioning of his team.

“We’ll just play it by ear, tingnan natin kung ano ang meron. We want to get better, that’s the bottomline,”said Lim while declining to pinpoint the weaknesses of his team he wants to address.

“So if there’s gonna be changes, if given the right trade, if we get better, we’ll do it. If not, we will not do it. Regardless of the position 'yan,” he added.

High-leaping forward Chris Ellis was supposed to be part of the list, but another source bared that Lim wants to try bringing out the full potential of the Fil-Am player before making any move.

Lim is no longer new to building up a champion team.

He was one of the men behind the formation of the multi-titled Talk 'N Text team, where he served as team manager from 2000 to 2010 after a two-season stint as coach. He also had a hand in the buildup of the Gilas Pilipinas team in 2010.

Lim’s eye for talent was also evident during his stint as San Beda coach from 2007 to 2011 when he formed the core of the Red Lions team which has already won five straight NCAA championships. He won four titles as Red Lions coach.

Tenorio has long been rumored to be on his way to GlobalPort in a trade for top rookie pick Stanley Pringle, but Lim said no such moves have been negotiated.

“Gawa-gawa lang 'yun eh para magkaroon ng kwento. I have not talked to anybody yet. Somebody came up with the Tenorio for Pringle trade. Sana maiwasan ang mga ganun. If it happens, it happens, di ba?” he said.

Asked if he has been given by San Miguel Corp. big boss Ramon S. Ang the all-encompassing powers to tweak the Kings’ roster, Lim took a deep breath.

Another source said Lim's orders from Ang are pretty clear.

“Kilala mo naman si Mr. Ang. Business-wise, winner na 'yan, how much more sa basketball. You’ve seen how he has done wonders for San Miguel and Purefoods. So it’s no longer a surprise, ‘the Boss’ wants to focus on making Ginebra at par with its sister teams,” said the source.