If it's not too much to ask, Aguilar would love to have idol Seigle's SMB throwback jersey

THE great Danny Seigle was more than a basketball idol to big man Japeth Aguilar. For him, ‘Dynamite Danny’ is his ultimate inspiration as a player.

A self-confessed Seigle fan, the Barangay Ginebra stalwart isn’t ashamed to admit he’s been looking up to the explosive Fil-Am forward ever since he was still in grade school.

Now that’s not meant to magnify the huge age gap between them, but rather to illustrate how Aguilar has always looked to up Seigle as a player during his younger years.

“Naging inspiration siya sa akin,” he told SPIN.ph. “Ganun talaga ang kuwento ng basketball. You start with someone who you would look up to.

Aguilar was filled with joy like a child who received his first Christmas gift recently after Seigle sent him a signed TnT Katropa jersey upon being told personally by the lanky 6-foot-9 forward how he idolized him growing up.

The confession was made by Aguilar after the Kings bundled out the Katropa in Game Four of the PBA Philippine Cup semifinals last season.

Seigle, now an assistant coach with Alab Pilipinas in the Asean Basketball League (ABL), never had an inkling about it until Aguilar approached him at the end of the game.

Seigle had a friend in Ginebra’s utility staff through whom he handed the signed jersey, and which Aguilar received on Christmas eve. 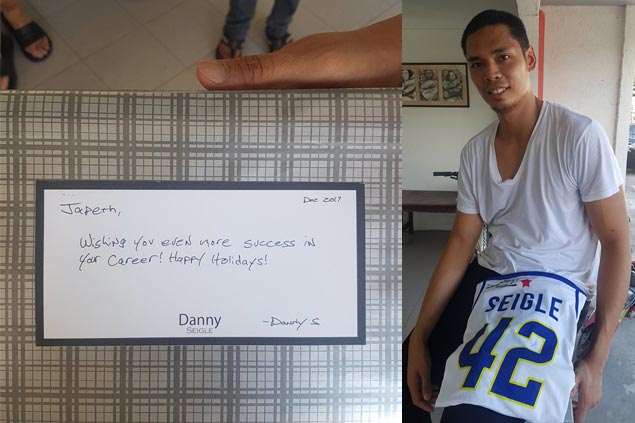 He liked the jersey very much, but would also love to have a San Miguel uniform of Seigle if ever he still has one.

Aguilar played for TnT in his first four years as a pro, but left the team the moment Seigle joined the franchise in 2013.

But he did remember the first time he played against his idol on the court.

“Later on na lang when you matured as a player that you get to understand why he was like that,” he said. “I had battles with him, and iba siya, very competitive.”

It’s because of that competitive nature that Aguilar, 30, never summoned the courage to tell Seigle how he idolized him.

While Seigle has been vocal about the fact that he has yet to officially retire from playing, it’s uncertain whether he can still make a PBA comeback.

For Aguilar though, he’ll always be the player who motivated him to be where he is right now.