WHETHER it’s a curse or not, there’s no more Black Jordan 7 Retro ‘Raptor’ for Ginebra big man Japeth Aguilar.

The shoe brought 'bad luck' for the lanky center after he sprained his ankle in the dying minutes of the Kings’ heartbreaking 104-98 loss to Alaska Aces in the last playdate of the PBA Commissioner’s Cup eliminations on Wednesday night at the Smart Araneta Coliseum.

The athletic Ginebra forward was going for a dunk when he suddenly found his way to the basket blocked by Alaska guard JV Casio. Aguilar twisted his right ankle as Casio was called for a foul after the collision.

The Gilas Pilipinas stalwart then limped off the court as he made his way to the team dugout, never to return again.

The loss relegated Ginebra to the eighth seeding and a quarterfinal clash with twice-to-beat Rain or Shine, which beat the Kings, 82-79, in a game that saw the Kings blow an 18-point lead.

Aguilar hopes he could play by then as team physiotherapists begin work on the sprained foot.

Until going down with the injury, the 28-year-old Aguilar was having an excellent scoring night, pumping in a personal conference-high 17 points on a near-perfect 7-of-8 shooting from the field. 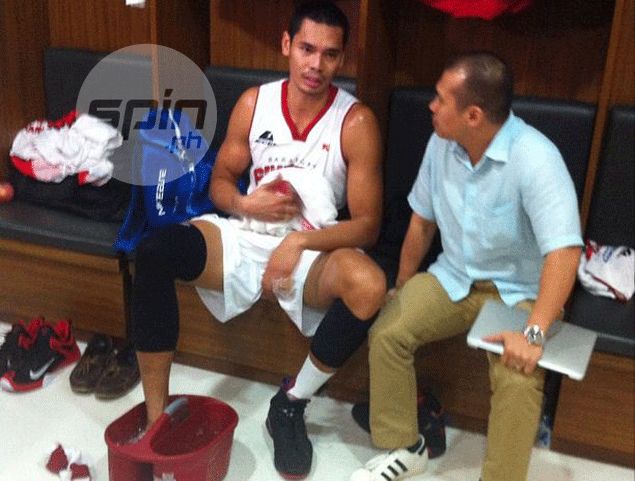 He was still holding on to his expensive pair of playing shoes when he came out of the Ginebra dugout.

Aguilar admitted he’s no longer keen on wearing the sneakers again as it marked the second time he injured himself wearing the same pair of shoes.