PBA Most Valuable Player to Newsmaker of the Year.

The San Mig star on Thursday was among the recipients of the PEPster’s Choice “Newsmaker of the Year" award - an honor that reinforces Yap’s unique status as a celebrity who bridges the gap between sports and show business.

Yap was the only athlete chosen for the 20 different categories via votes cast by fans and followers of Pep.ph, sister site of Spin.ph and the country's No. 1 showbiz website.

The basketball star has long crossed over to the world of showbiz following his marriage to TV host-actress Kris Aquino, but he is clearly not entirely comfortable receiving such honor.

Philippine Entertainment Portal editor-in-chief Jo-Ann Maglipon maintained it was fans who decided the final outcome of the PEPster's Choice.

The balloting was audited by the firm Punongbayan & Arroyo.

The event was held at the Mango Tree Bistro in Bonifacio High Street in Taguig City and hosted by actress Ai Ai delas Alas, whose greeting to the newly arrived San Mig star guard set the tone over the entire proceedings. 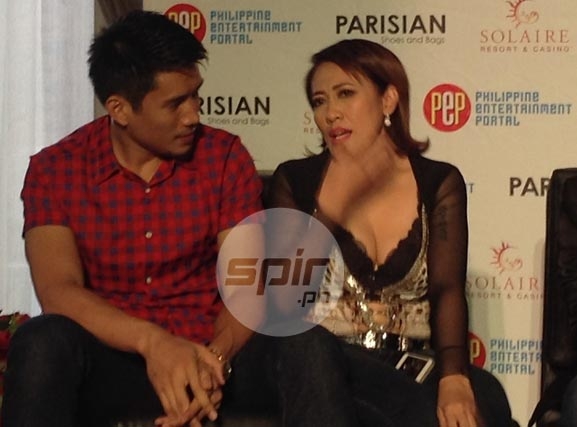 “Upo ka friend! Sisikat tayo ngayon todo!” said the comedienne as she invited the PBA star to sit beside her during the question and answer portion of the press conference.

The two stars are connected by a common ‘ex’ - Aquino. Yap was once married to the popular Aquino scion and their union bore a son, James ‘Bimby’ Aquino who is now also a celebrity in his own right. De las Alas, on the other hand, was one of Kris’ closest friends in the entertainment industry, even serving as a godmother to Bimby before they had a recent falling out.

The 6-3 PBA superstar said he and delas Alas have since made their peace and the cager considers the popular comedienne a true friend, with his kumare being a constant source of advice.

In a more serious tone, delas Alas said she’s been trying to help Yap with his son and how he can become a better father.

Last month, the 32-year old PBA star’s birthday wish came true after he was able to see his son after a five-month separation. He is allowed visitation rights every Friday and said his efforts now are mainly spent in establishing a closer personal relationship between father and son.

Tension between the former spouses thawed after Kris defended Yap after the San Mig Coffee star was accused by some critics of “selling out” during his team’s semifinals series against sister team Barangay Ginebra in last year’s PBA Philippine Cup.

Delas Alas admitted that out of loyalty to Kris, she considered Yap an enemy and it was only later that they became friends. Onstage, the two friends were amiable, taking several selfies and were also engaged in snippets of private conversation.

Yap even outshone young actors Daniel Padilla and Dennis Trillo, with members of the entertainment media clamoring to interview the two-time PBA MVP after the press conference.

When asked about his selection as "Newsmaker of the Year," Yap admitted he did not know how to feel.