Is SMB starting to show its age? Let's look at the numbers

NUMBERS don’t lie: Seven finals trips and six titles in the last 12 Philippine Basketball Association (PBA) conferences. No team dominated the competition quite like the San Miguel Beermen these past four years. They would also like you to believe the dominant run is far from done, despite a shocking and abrupt exit in the 2018 Governors’ Cup.

“Stop with all this we are getting old,” SMB guard Chris Ross tweeted shortly after bowing out to Alaska last November 7. He was quick to point out, and fairly so, that the Beermen won a fourth straight Philippine Cup crown, led 2-1 against Ginebra before eventually falling short of repeating as Commisioner’s Cup champs, and dealt with injuries to star June Mar Fajardo and import Arizona Reid in the season-ending conference.

“Still a pretty good year. See you next year,” he added.

Then again, numbers never lie. The performance of the Beermen’s aging core show some signs of decline, most notably after limping to a 6-9 finish to this season.

With stats provided by PBA statistician Fidel Mangonon III, SPIN.ph did some digging to see how the Beermen’s key players performed over the years and unveil some insights. One clear finding: the 29-year-old Fajardo was having a breakout season before sitting out most of the Governors’ Cup with a shin injury. In his six-year career, the Cebuano giant is firmly in his prime with the stats to back it up — a personal-best 21.9 points per game on 60.4 percent shooting, 12.9 rebounds, and 1.35 blocks in the first two conferences.

The rest of the SMB stars? The data paints a slightly dimmer picture, particularly for its veteran backcourt of Alex Cabagnot and Ross. 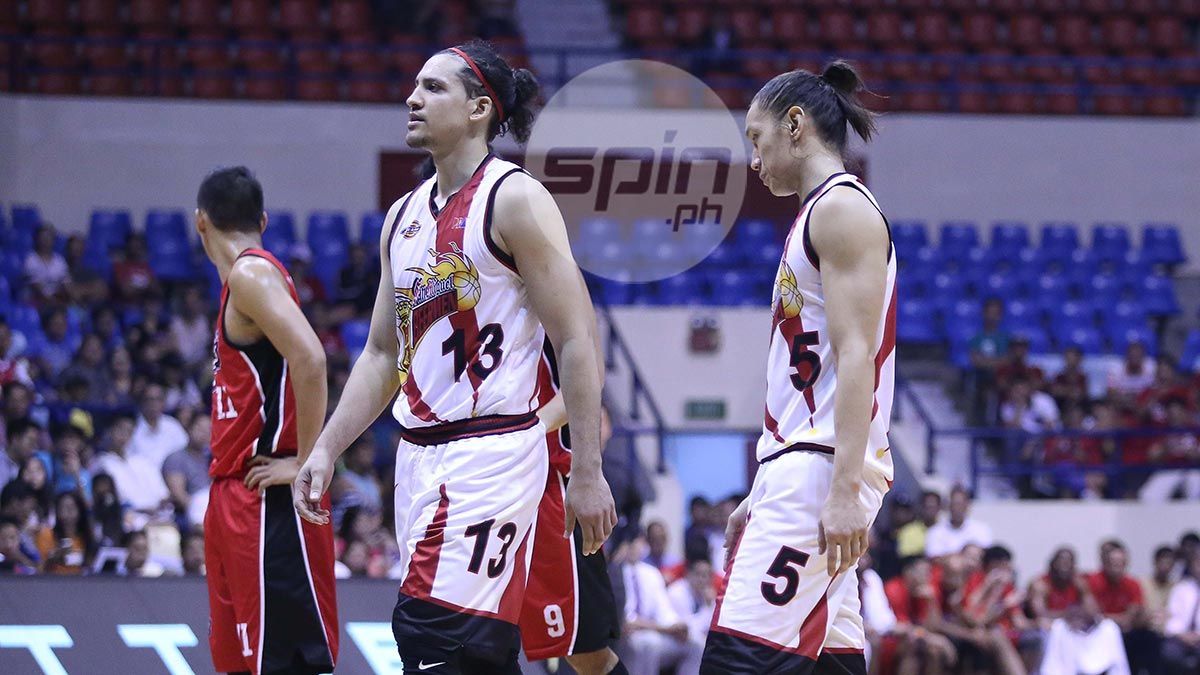 Last year, the Beermen were completely dominant in winning two titles. But other than Fajardo and Marcio Lassiter, the other members of the SMB core slowed down a bit.

Cabagnot, in particular, saw his scoring drop from 16.2 points last season to 13.9 this year. The seven-time PBA champ started strong, dropping 15.8 a game in the Philippine Cup. But signs of decline already came in his shooting accuracy, with just a 27.2% clip from beyond the arc. After making 2.2 triples on almost 34% shooting last year, Cabagnot’s numbers slipped as the season went on. Check out these numbers:

The drop in the Commissioner’s Cup finals is the most striking, and Cabagnot wasn’t the only one who saw his numbers plummet.

Arwind Santos, Ross, and Lassiter also suffered through the worst stretch of their SMB careers in those six games against Ginebra. Defensive specialist Ross enjoyed a breakout year in 2017, averaging career bests in points (11.2), assists (7.2), steals (2.8), three-pointers made (1.2) and three-point shooting (31.6%). But other than his accuracy from beyond the arc, his numbers slid this season.

The arrival of Christian Standhardinger figured to affect Santos’ performance, particularly in the rebounding department. But it also didn’t help his numbers that the 37-year-old forward took nearly 60% of his shots this year from beyond the arc, rather than inside the paint. As Santos fell in love with his jumper, 2018 was only the third season in his 12-year career that he averaged less than 14 points a game (13.5) and his first to norm under 7 boards (6.7).

Coming off a horrendous championship battle vs Ginebra, Lassiter appeared to have bounced back in the Governors’ Cup to finish his best scoring year as part of SMB with 15.2 points per game. In fact, his scoring remains on the rise for the third consecutive year. Still, the 31-year-old sniper, who shoots 39% from deep in his career, could not prevent a second straight season of shooting under 36% from rainbow country.

Are the Beermen really getting old? No doubt. Nobody gets younger. Are the aging SMB stars slipping? A bit.

But has San Miguel already reached its peak? It’s hard to tell, especially with Fajardo and Standhardinger still in their primes. Guess we all have to wait next year to see if the numbers remain trending down or if this was just a one-off blip.