PUERTO PRINCESA - In the last Philippine Cup semifinals, the showdown between the San Miguel Beer and Talk 'N Text got so physical it was marred by a flagrant foul called against Ranidel de Ocampo on Arwind Santos.

The incident, which saw de Ocampo under-cutting Santos after a dunk, nearly triggered a fight and prompted Commissioner Chito Salud to slap a P10,000 fine on the Tropang Texter.

Santos admitted he nearly lost his cool after the hard foul.

De Ocampo maintained his innocence on the "sahod" claim against him.

Fast forward to the 2015 PBA All Stars here in Puerto Princesa City Palawan, where, ironically, Santos and De Ocampo again found themselves as designated roommates.

And since the incident is still very much fresh in the memories of many including the two hardcourt rivals, Santos joked de Ocampo remained wary of retaliation. 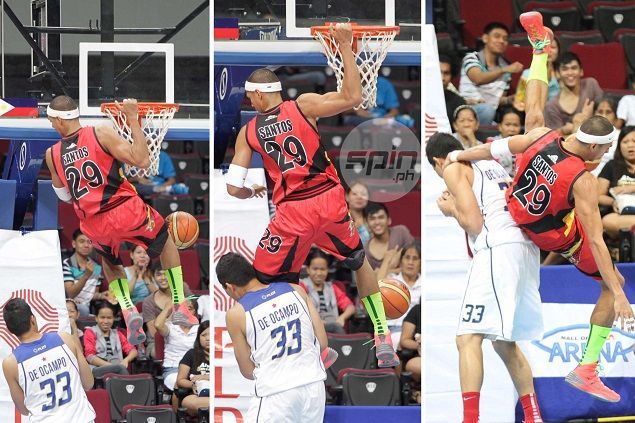 Turning serious, the 2013 PBA MVP assured that whatever happened between him and De Ocampo, they manage to leave it on the hardcourt and that they've put the incident behind them.

And how do the two star players from rival teams turn their time together into something productive?

Santos and De Ocampo said they have choreographed the dance steps for the North team in the pre-All Star Game dance off on Sunday.

And how do they spend the rest of the time inside their room at Aziza Hotel?

De Ocampo also explained one instance why he left the room shortly after Santos came in.

PBA media bureau chief Willie Marcial said the room assignments are done randomly, although he admitted that most teammates normally end up as roommates.

Asked if they are not afraid that the two might go at it inside the room, Marcial shook his head.