IAN Sangalang wasn’t supposed to be the best big man in the fourth quarter of a PBA Finals game, especially since he was sharing the floor with four-time PBA MVP June Mar Fajardo.

But after his scoring explosion in the payoff period of Game One of the Philippine Cup Finals, there was little doubt the Magnolia big man with the velvety touch around the basket can seize the spotlight when he wants to.

The former NCAA MVP scored 14 points at crunchtime on Friday night, including the final four points to lead Magnolia to a pulsating 105-103 win over a powerhouse San Miguel squad at the Smart Araneta Coliseum.

Sangalang finished with 29 points on 13-19 shooting, along with nine rebounds and two steals. Though he still fell short of Fajardo’s total output of 31 points and 18 boards, Sangalang never doubted himself that he can face any player that is put in front of him.

Sangalang was certainly not lacking in confidence during that final stretch.

With the game tied at 103-all, Sangalang confidently begged for the ball with Fajardo on him and quickly attacked his bigger counterpart. Sangalang baited Fajardo with a fake before getting fouled and draining two free throws which turned out to be the marginal points.

Despite the win, Sangalang said the Hotshots remain the underdogs in this series. 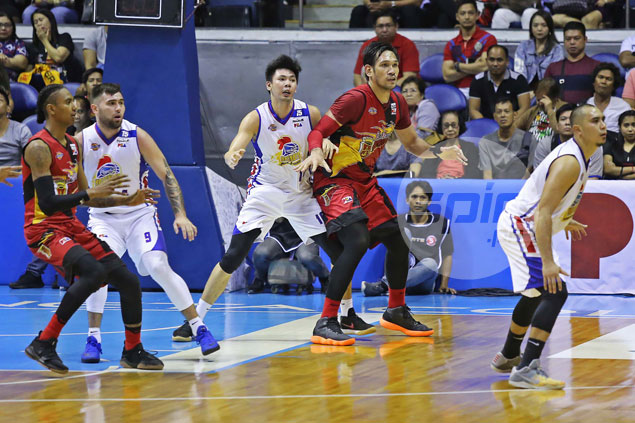