How Tim Cone convinced leaders James Yap, Mark Caguioa to go all in

WITHOUT question, James Yap and Mark Caguioa were two of the most prolific scorers in the 2000s - and among the all-time greats in the PBA.

"No two people are alike, and no two people could be further alike than Mark and James. They're just two completely different people," Cone told Zoom In on SPIN.

Yap was a probinsyano who cut his teeth at University of the East before getting the baton from Purefoods great Alvin Patrimonio; Caguioa was a San Juan-born amboy who entered the league like a supernova and became the acknowledged heir to the Ginebra throne of the legendary Robert Jaworski.

But aside from the race between Yap and Caguioa for that premier space in billboards, they were also the first men who Cone knew he had to convince to buy into his system when he took over the reins, first at Purefoods and later Ginebra.

"The idea is you got to get the superstars to buy in. You got to get guys and develop that trust with the superstars before you get everybody else, because if you can't get that superstar to get in line with what you want to be, what you're doing, or what you're thinking, then you cannot be successful," the winningest mentor in PBA history said.

Lucky for him, they both did. 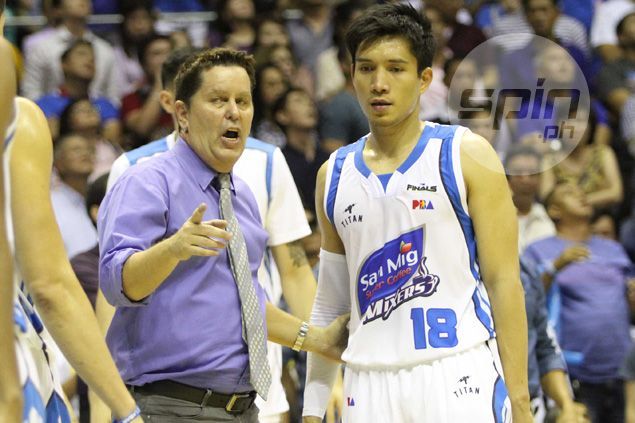 But it wasn't an easy job earning Yap and Caguioa's trust the moment he got on board, especially with the issues that their respective team faced.

After a successful 22-year run with Alaska, Cone joined the Purefoods franchise, then named B-Meg, in 2011. When he took over the post from Jorge Gallent, Cone said he saw a team that was having problems in terms of chemistry.

"When I came to Purefoods, I thought that the chemistry was a little fragile. If you remember that was the time between Kerby Raymundo and James Yap weren't quite getting along, they're having trouble sharing the limelight with each other, and it was a really scattered team," he recounted.

"Our challenge, I felt, as a coaching staff at that point was to try to bring the chemistry together. And, of course, trying to also sell the triangle to James, because you know James had a previous offense where everything was run through him and suddenly, we're running a system in which it was going to be equal opportunity, you had to move through the ball and no one was going to set up a play for you.

"And he was used to calling certain plays. There was play No. 3 and that means James is going to run through three screens and get a jump shot or get the ball and isolate. We just didn't do that with the triangle, so that was a huge adjustment for him."

The quandary of preaching selfless basketball was pretty much the same problem Cone faced at Alaska with Jojo Lastimosa. With that experience in mind, he knew he just had to get through the shell of the two-time PBA MVP.

It was still a challenge, nevertheless.

"James is actually very quiet. He doesn't say much, he kind of stays to himself a little bit more. People gravitate to him, but he doesn't gravitate to people," Cone said. "I mean people want to be around James but James is like okay to be by himself. But people go to him and gravitate to him."

Yap soon saw first hand how he could remain a major contributor in the new system. Although the Escalante, Negros Occidental gunner no longer scored as much, he was able to facilitate more for his peers, and as a result, reaped more success.

It was a completely different task when the American mentor jumped to Ginebra in 2015, replacing Frankie Lim.

"Ginebra had a different kind of issue. I thought they had a team that really got along well together, but the problem was that they didn't do well under the limelight," he noted.

"It's funny because they were Ginebra and you thought they would, but it seems like every time they felt they had to perform so well every night that it was like a burden for them. Medyo mahirap for them, they didn't know what to do. It was very hard, in big moments, they wouldn't make the big play."

And the first guy Cone dined with?

Caguioa, who, although he had seen his minutes dip in favor of younger peers, remained until that time the unquestioned heart and soul of Ginebra, 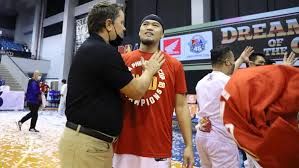 "I called Mark Caguioa and I asked him to lunch. I met with him first, and then the next day I met with Greg Slaughter also, just the two of them. I felt those two were my two targets and I had to get there by them and what we're going to do and I wanted to get their feel for what they felt was going on with the team," he shared.

"So I took Mark to lunch and I listened to Mark and I gave them ideas of what we were going to do and how we're going to do it. And I did the same thing with Greg the following day, and then I met with the team a couple of days later."

For Cone, it was a matter of making the Gin Kings leader understand what the team must do to be able to succeed, especially with the loaded team in the midst of an eight-year title drought.

"We had to teach them to kind of relax and teach them to enjoy the tension rather than to be burdened or to be pressurized. So that was, I felt, our goal with Ginebra, to teach them to embrace the crowd, embrace the pressure, and to be able to play and stay with what they do during those times instead of Mark trying to do too much on his own or Greg or Japeth [Aguilar] or LA [Tenorio] to do too much on their own. It's learning to stay within the system, trust the system, and let that work for them," he said.

And it only meant a return to the glory days for Ginebra, breaking through the glass ceiling in 2016 and winning five championships, and counting, under Cone.

Still, Cone knew it wouldn't be possible had he not earned the superstars' trusts.

"But you know, James and Mark were really the two targets for me that we needed to buy in before we could achieve anything in those respective teams."

As different as they were in terms of personalities, there was one similarity between Yap and Caguioa, Cone said.

"One thing that's common about James and Mark is that the both of them are super nice. I mean just really, really nice people," he said.