COLUMN: How Arwind Santos can make NorthPort a legit contender

Some critics and pundits might scoff at this very notion, but it has to be said: NorthPort actually took one step closer to becoming a legitimate PBA contender when it flipped Vic Manuel for longtime San Miguel star Arwind Santos on Monday.

Of course, one question persists: How long will Santos stick around with the franchise?

The wise bet is that he won't stay for long given NorthPort's penchant for trading away key pieces instead of giving the core some time to develop — an indisposition that has continuously prevented the team from reaching its full potential. If the Batang Pier brass decide to keep Santos, though, they might actually have a real shot at a deep playoff run.

If you only looked at the numbers and not at their record in the recent 2021 Philippine Cup, you'd probably think this team was a bonafide title contender. NorthPort actually ended up with the second-best net rating — ahead of the likes of the Beermen (the team that booted out them out in the quarterfinals), the runner-up Magnolia, and semifinalists Meralco — that only trailed eventual champion TNT, which finished the conference alongside Batang Pier as one of only two teams to carry a top-three offensive and defensive rating.

The reality, however, is that NorthPort severely underachieved. Coach Pido Jarencio's wards entered the playoffs with a 6-5 record that could have easily been a 9-2 slate if not for three gut-wrenching losses in the clutch the elimination round. (That's a total of four if you count the Game 1 dagger by Alex Cabagnot in the best-of-three quarterfinals that the Batang Pier eventually lost).

But the potential to grow and evolve into something more is there, standing in plain sight. The trio of Robert Bolick, Jamie Malonzo, and Greg Slaughter already oozes a lot of talent and promise; add Santos to the mix, and you have a firm foundation for a squad that can definitely be more than another talented team that falls short when it counts.

Pairing Santos, a stretch four, with Slaughter basically has the similar effect of putting the 40-year-old forward alongside June Mar Fajardo in San Miguel: you'd be giving your star center more room to operate in the paint and less double teams to contend against. Santos only hit 31.5-percent of his 5.4 attempts from deep, but NorthPort is hoping that number is closer to the 36.8-percent that he cleared in the 2020 bubble — a mark that ranked 10th among 18 players who fired more than five threes a game. It's a boon for Slaughter, who could be in line for even more efficient outings after a solid conference where he averaged 17.6 points on 50.4-percent shooting.

Santos being a viable release valve that slings shots from deep will also open more driving lanes for Bolick and Malonzo. Bolick (17.2 points, 7.7 assists) is already crafty with his offense and will certainly find an open Santos nine times out of 10, but the bigger benefit here is that he'll get easier shots; he shot 52.5-percent on twos, but hit only 24.5-percent of his threes, which is not ideal for a guy that attempted the third-most triples (7.5) last conference. Ditto for Malonzo, who will probably keep assaulting the rim once he finds fewer men to contest him inside the paint. (He also shot 33.9-percent on 4.3 attempts from long range; expect that number to trend up as defenses grapple with the decision of either letting him shoot or drive.) 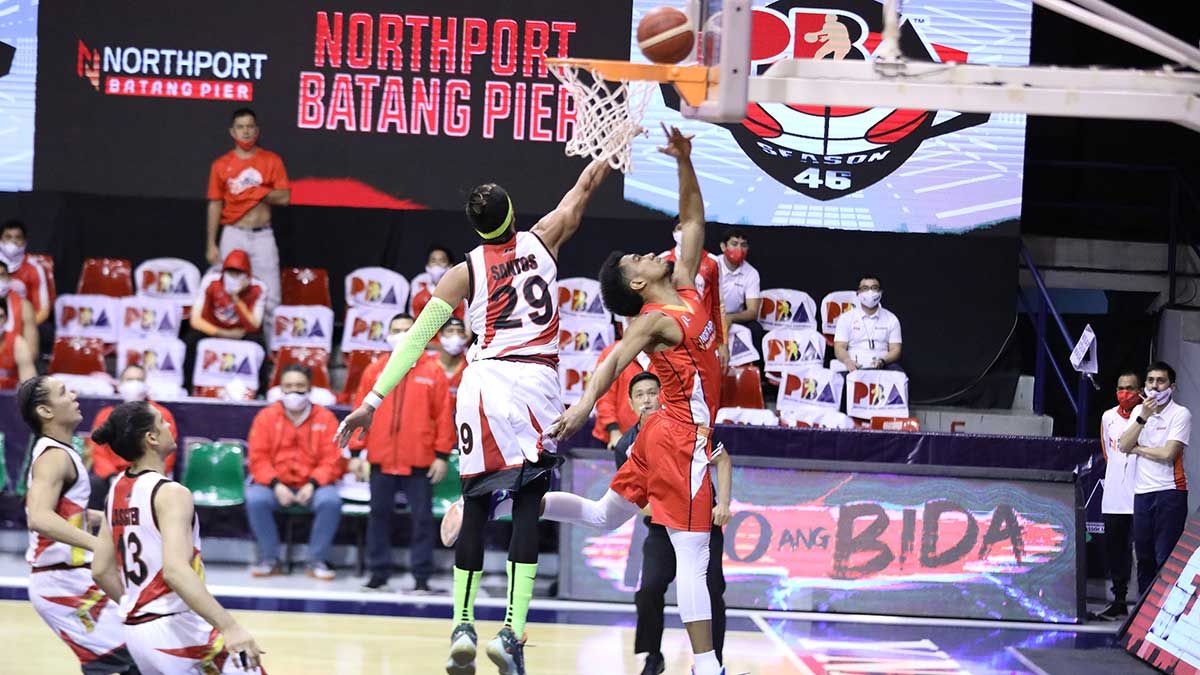 The defense should be fundamentally sound with Santos cleaning up the weakside and covering up for Slaughter's flaws on that end of the floor, much like he did for Fajardo when he was with the Beermen. Smart teams will still find a way to expose Slaughter or Santos in the pick-and-roll or in other situations in the perimeter — just like what TNT did in the latter stages of the Tropang Giga's seven-game semis series against SMB — but fortunately, the Batang Pier have another man that could operate as a "free safety" for when all else fails in Malonzo, who was one of only four players to average more than a steal and a block last conference. Some dip is expected, especially since Santos will be replacing Sean Anthony — the third-best defender in Dribble Media's defensive box plus-minus — but NorthPort should still hold up fine on that end.

NorthPort also now has three of last conference's top-10 rebounders. Even with Slaughter (10.8 boards, third) and Malonzo (8.9, seventh) battling on the glass, the Batang Pier still gave up the third-most offensive rebounds. Some improvement in that area is guaranteed.

One fact remains, though: all of that wouldn't matter if NorthPort trades away Santos or any other member of their current core. For a team that had franchise-defining talents like Stanley Pringle, Terrence Romeo, and Christian Standhardinger before eventually dealing them away for various reasons, it’s not a question of whether or not they’ll package one of their current stars in a later deal; it’s a matter of when, not if.

But NorthPort can always buck the trend. Some improvements around the margins can still be made, sure, but retaining the core and letting Jarencio and his staff operate with this team for an extended amount of time is the most prudent way to conduct business. If the Batang Pier actually have any aspirations of shooting for something bigger in the PBA, then there should be an understanding that this is arguably the franchise's best chance at succeeding after nine seasons of mediocrity. Thinking that the brass would know that is kind of a tough gamble, but one can hope, right?