HARVEY Carey said the coming PBA season may or may not be his last, but either way he hopes it would be a memorable one.

A report by the Bay Area-based portal Times Herald Online stated that Carey is about to wrap up his PBA career with the TNT KaTropa, the team that drafted him fourth overall in the 2003 draft.

The 40-year-old San Francisco native, however, said he is still looking at his options, but admitted he is also seriously considering 2020 as the 17th and final year of his career in the PBA.

“I didn’t make an announcement officially but potentially, it could be my last year,” said Carey on Wednesday after TNT’s tune-up game against Blackwater at the Kerry Sports Center. “Hopefully, it will be a great year and then we will see what happens at the end of the season.” 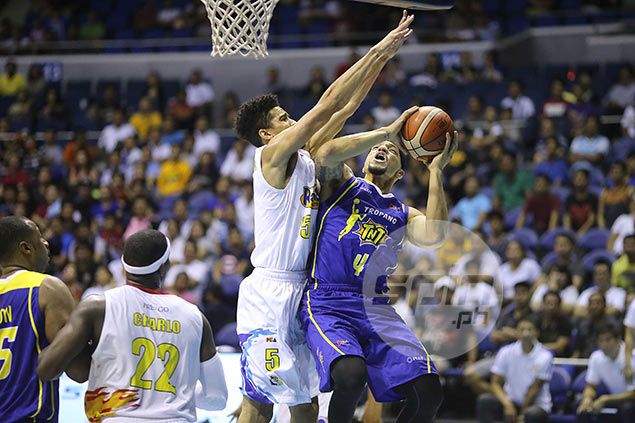 Carey's likely retirement will come at a time when a number of contemporaries are also hanging up their sneakers, among them Asi Taulava, his teammate with TNT during his early days, Sonny Thoss, PJ Simon, and Cyrus Baguio.

Carey believes all these players still have a lot left in the tank.

“I believe all those guys can still play in the league, but, you know, everyone has their time. They had great careers. Asi, Sonny Thoss, PJ, Cyrus, it’s been great competing with those guys over the yers," the Fil-Am forward said.

"Asi was my teammate, he was my veteran when I first came in the league. I wish those guys the best this season and in their next step,” added Carey.

While retirement is just around the corner, Carey said he still loves the grind that comes with being a basketball player, and is challenged by the presence of the young guys, not just at TNT but around the league.

“I love coming in and putting in the work. That’s what I’ve been doing my entire career. Nothing has changed. Got to work even harder now that I’m a little bit older and playing against guys that saw me when they were kids and now, they are my teammates like Ray (Parks), and those guys. I’m enjoying it everyday,” said Carey.

Carey said he likes the chances of TNT this season, especially with the entry of Poy Erram and the young blood led by Ray Parks starting to make their presence felt with the KaTropa.

“Great players. We are just starting to gel before the start of the season. I love being around with these guys. They ask a lot of questions and I don’t mind being a mentor to the guys,” said Carey.

“Obviously, he (Poy) brings that presence inside, something that we have been missing over the years. Very skilled player. He was actually my teammate when he was a rookie and to see him develop over the years, now he is back, he will take us to another level I believe,” said Carey.

Now in the twilight of his career, Carey said his goals is centered around the team as he hopes to help TNT break a five-year title drought.

“Just team goals,” said Carey on what are his goals for this season. “Hopefully, we can win a championship which is always the goal of the team. It’s a joy everyday, everyday in practice, beig with the guys. That’s about it. (The goal is) to go out on a winning note if it is my last year.”