DESPITE emerging as the Best Player of the Conference of the PBA Governors Cup, Greg Slaughter isn't qualified for the yearend MVP, Mythical Team and other individual awards.

It's because of an old pro league rule that forbids a player from contending for any season-ending awards if he failed to see action in 70 percent of the pro league’s schedule.

Slaughter, 29, only suited up for Barangay Ginebra this conference after coming back from an almost year-long layoff forced by an ACL injury.

The Ginebra slotman wasted little time getting back to top form, leading Ginebra back to the Governors Cup Finals while bagging his first Best Player of the Conference award at the expense of other prominent candidates like Chris Newsome, June Mar Fajardo, and Jayson Castro.

According to PBA external affairs and communicate head Willie Marcial, Slaughter should've been in the running for the MVP award under a rule that makes BPC winners automatic candidates for the league's highest individual honor.

Unfortunately for Slaughter, his failure to play in the required number of games supercedes that new rule, Marcial added.

With the Ginebra big man out of the equation, the MVP race has now been narrowed down to heavy-favorite June Mar Fajardo, San Miguel teammates Chris Ross, Alex Cabagnot, and Arwind Santos, and TnT Katropa’s Jayson Castro.

Fajardo, the reigning three-time MVP, won the BPC award of the Philippine Cup, while Ross, also a top candidate for Most Improved Player, was the BPC winner of the Commissioner’s Cup. 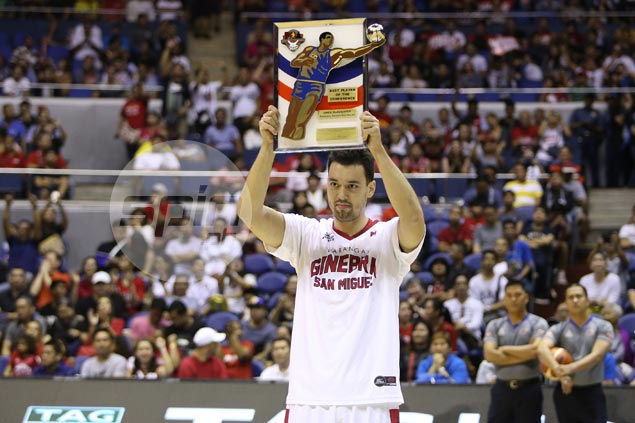